Further to my last Weekly Market Update and its Addendum, this week’s update will look at:

You can see that price remains elevated near their Weekly upper Bollinger Band and in overbought territory according to their Weekly Stochastics in all of them, except the Dow Utilities, which found interim support at its 50 week moving average.

As I mentioned in my last weekly market update, price was elevated on, not only the Weekly timeframe, but also the Monthly and Monthly Options Expiration timeframes. Price remains overcrowded and overbought at current levels on these three timeframes, in spite of the brief pullback they experienced earlier in the week on a Daily timeframe. I wouldn’t be surprised to see a further downdraft in these Indices and increased volatility remain a factor in intraday moves in the near-term, particularly leading up to the next Fed meeting and Chairman’s press conference on June 19th and the monthly and quarterly June Options Expiration on the 21st. 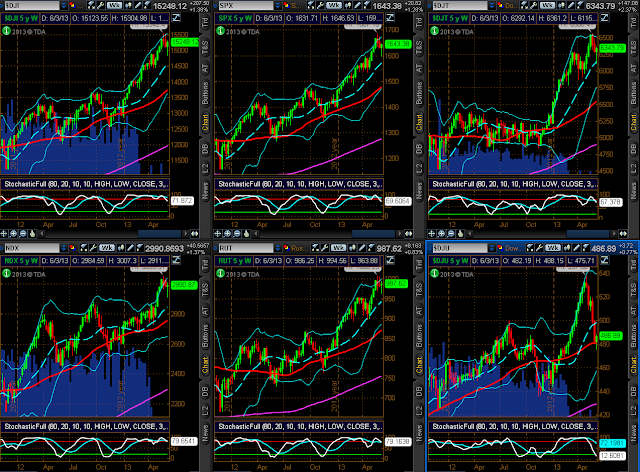 As shown on the Weekly charts and the percentage gained/lost graph of the Major Sectors, the largest gains were made in Consumer Staples and seven others, while Materials lost a minor amount on the week.

The above comments are also applicable to these Sectors with respect to elevated price and overbought territory on the same three timeframes. 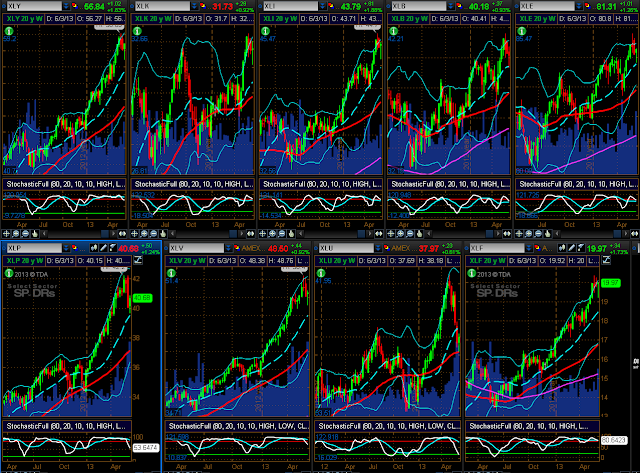 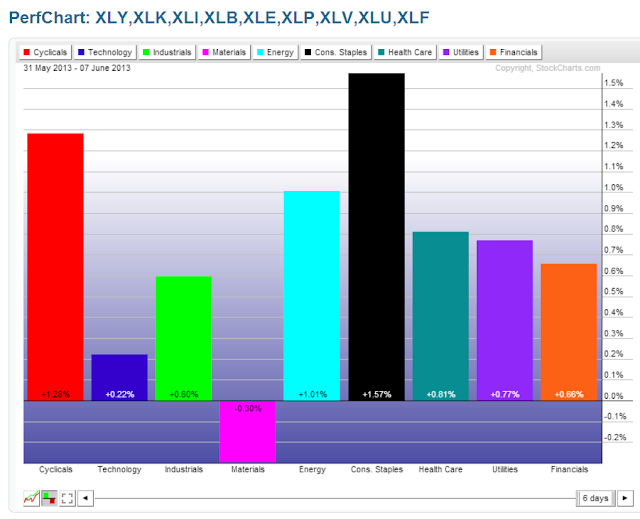 As I mentioned in my last weekly market update, the SPX:VIX ratio was not confirming the last swing high made in the SPX and the Momentum indicator was still trending below the zero level, hinting at further weakness in the SPX.

As of Friday’s close, price has rallied after an initial drop earlier in the week and is now being squeezed in between near-term support at 105.00 and resistance at 110.00. While the Momentum indicator has hooked up, it’s still below zero. Failure of price on this ratio to move and hold above 110.00, along with Momentum moving and holding above zero, will hint of further volatility and weakness to come in the SPX…something I’ll be monitoring over the next week(s). 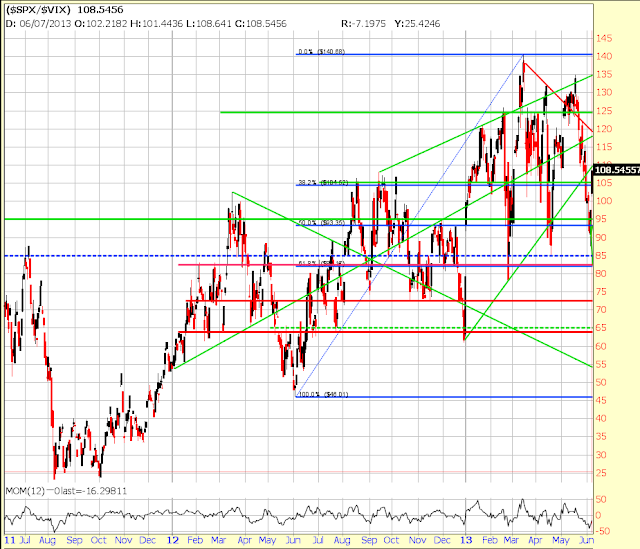 SPLV vs. SPX vs. CRX

I last wrote about the comparison of the SPLV, SPX, and CRX in my post of May 30th. I mentioned that the SPLV, which is generally correlated with the SPX in its movements, had been diverging negatively and had made a lower closing swing low on the Daily timeframe. Furthermore, the Momentum indicator had dropped below the zero level signalling potential further weakness ahead. The following Daily chart shows that, since then, both of these pulled back a minor amount before bouncing.

I also made reference to the CRX correlation with the SPX in that post. You can see that the CRX has continued its decline and large divergence that began in mid-February of this year. In my earlier post of May 23rd, I had shown the correlation of the two for the past three years and how such a divergence did forecast larger moves down in the SPX during that time.

While we have yet to see much of a downdraft in the SPX, I’ll also be monitoring the behaviour of its price relative to the SPLV and CRX going forward. Should price continue to decline in the CRX, I’d be surprised if both the SPLV and SPX didn’t follow. That’s where the SPX:VIX ratio will come in handy to confirm either strength or weakness in the SPX, both in the short term, and the longer term. 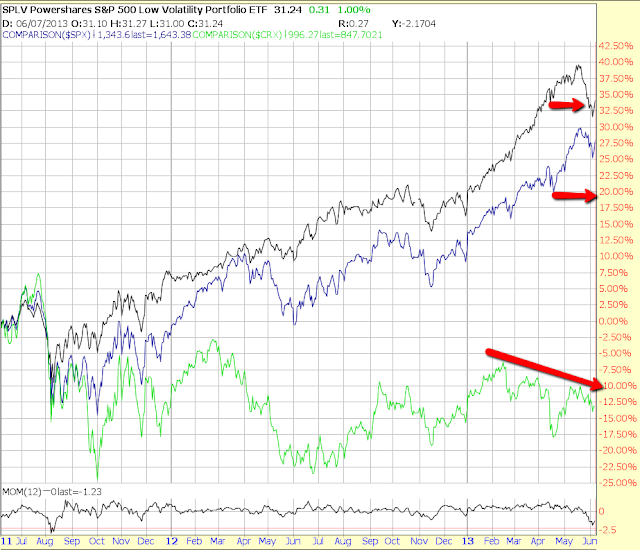 The following percentage gained/lost graphs are being provided (without commentary) for the purposes of simply seeing, at a glance, where money flow has been directed this past week in various world markets, and to see the “outliers”…that is, which markets gained or lost an exceptional amount compared to the others…ones to watch going forward to see if they continue leading in weakness or strength, and what effect that may have on other instruments (e.g., Greece, China, Brazil, Japan, Australia, Oil, U.S. $., Bonds, and Homebuilders). I wrote about Emerging Markets and Japan’s Nikkei earlier in the week here and here, where you can find further details on support and resistance levels. 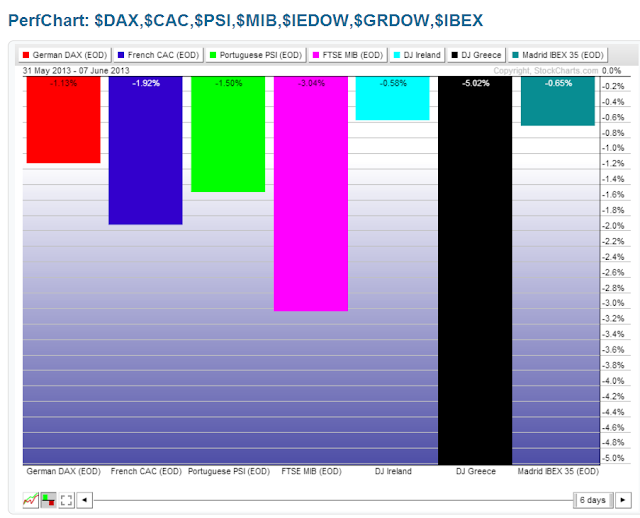 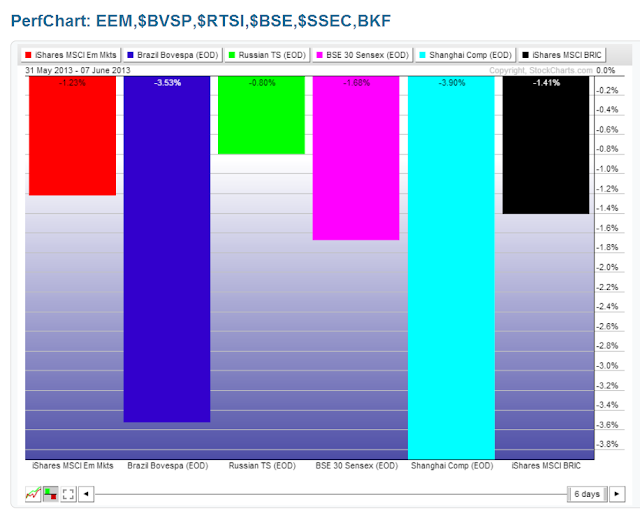 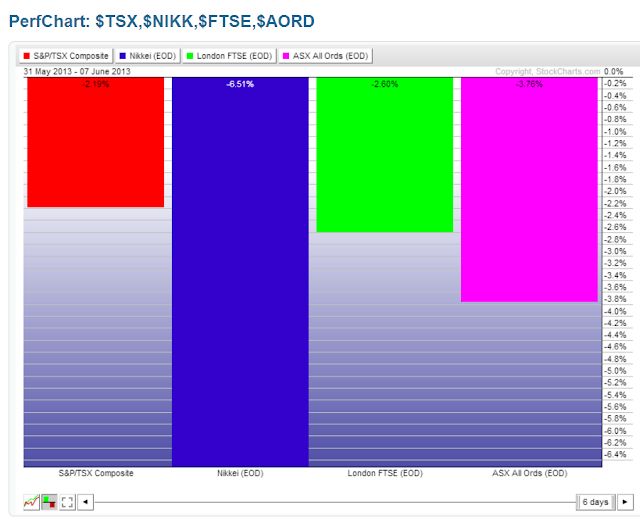 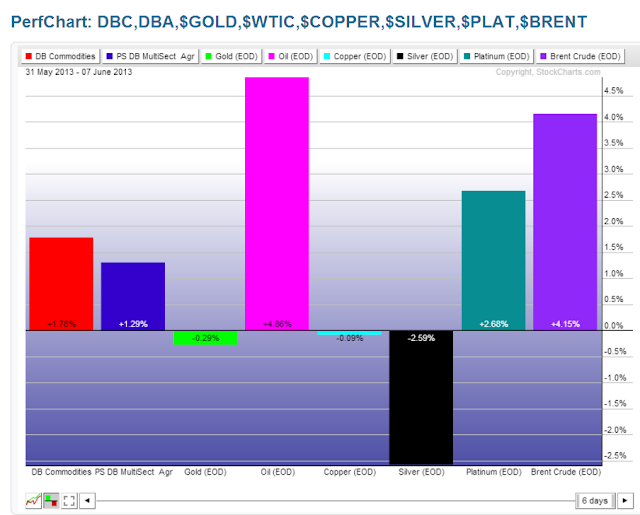 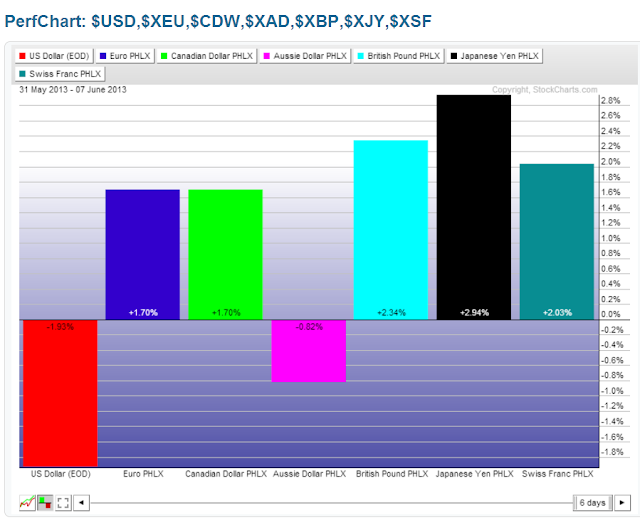 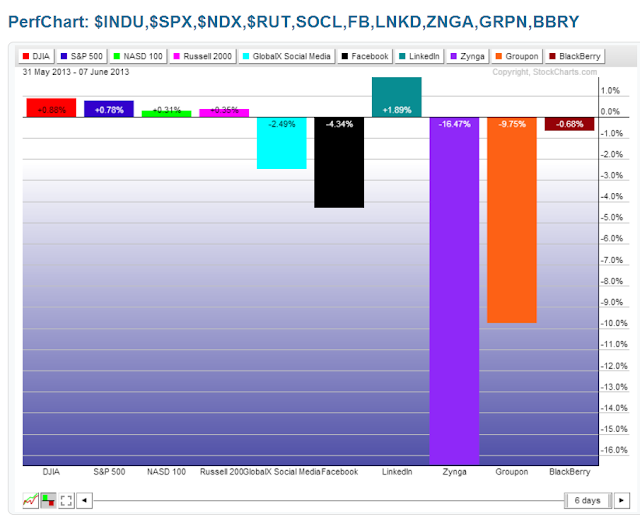 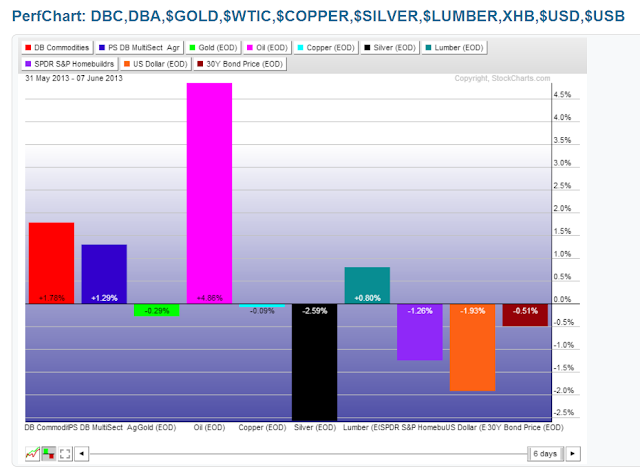 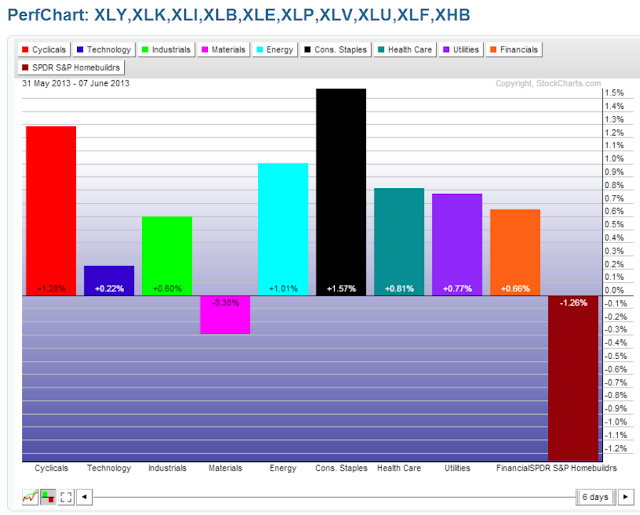 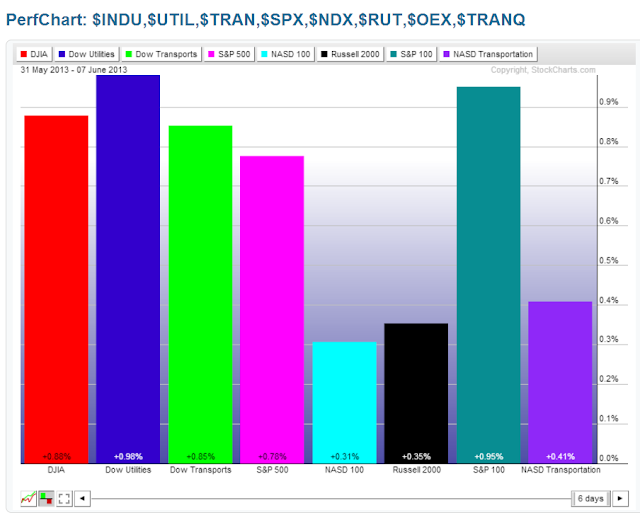 The following three Daily charts show the percentage of stocks above their 20/50/200-Day moving averages. You can see, that in the short term, intermediate term, and longer term, there is still the potential for stocks to move higher before hitting resistance levels at around their respective 80 level.

As such, we may well see a short-term rally in equities to, potentially, new highs, before we see another pullback in equities, in spite of their above-mentioned elevated and overbought conditions…ones to watch for further confirmation of either strength or weakness. 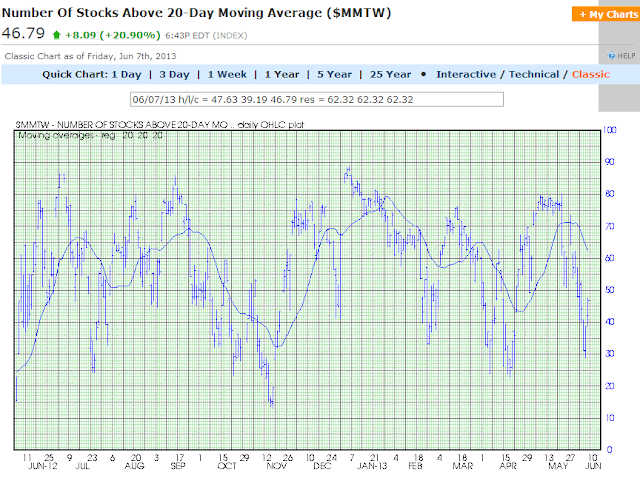 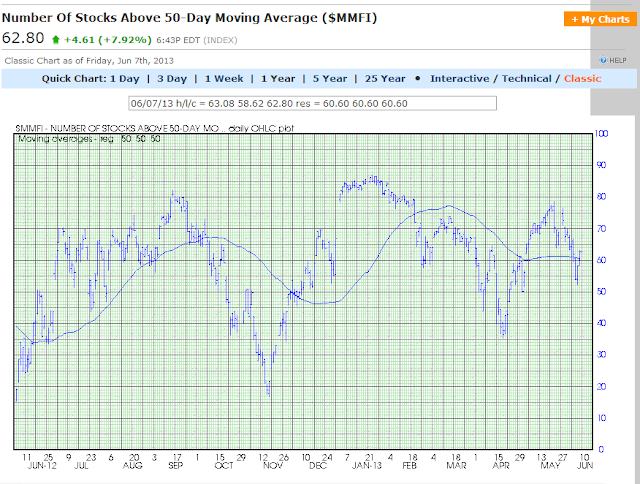 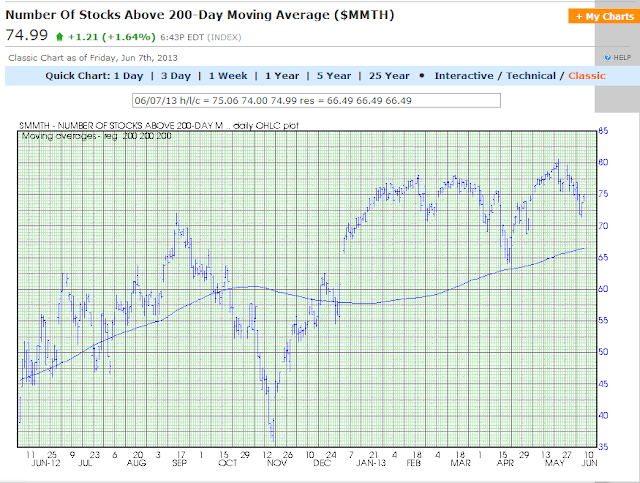