An All-Time High On Non-GAAP ‘Crap’?

It’s been a nice day so far for Salesforce.com (CRM) longs, with the stock up nearly 14% intraday to an all-time high, after the company beat Wall Street estimates on revenue, adjusted net income, and forward revenue guidance. But software entrepreneur David H. Hansson (@DHH on Twitter), an early critic of Groupon (GRPN), noted in a series of tweets the gap between CRM’s adjusted earnings numbers and what they would be according to Generally Accepted Accounting Principles (GAAP): 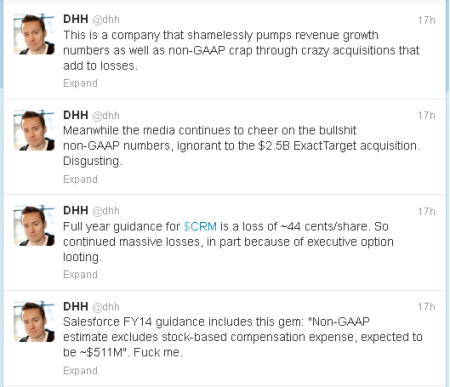 Given the concerns Hansson raises above, and his previous prescience in pointing out problems at Groupon, Salesforce longs may want to consider adding some downside protection here. Below is the optimal collar*, as of intraday Friday, to hedge 500 shares of CRM against a >15% drop between today and February 21st, for an investor willing to cap his potential upside at 10% over the same time frame. Before we look at it, let me anticipate a question:

Well, you might not. In which case, you could pay to hedge, or just take your chances and hope the stock doesn’t have a big correction over the next six months. On the other hand, you might be willing to cap your upside here in return for getting paid to add downside protection, considering that the stock is at an all-time high and in light of the concerns Hansson raised about it. In that case, here’s that optimal collar:

As you can see at the bottom of the screen capture below, the net cost of this optimal collar was negative, meaning you would have gotten paid to hedge in this case.

In some cases, hedges such as the ones above can provide more protection than promised. For a recent example of that, see this post about hedging shares of BlackBerry (BBRY).

*Optimal collars are the ones that will give you the level of protection you want at the lowest net cost, while not limiting your potential upside by more than you specify. Portfolio Armor‘s algorithm to scan for optimal collars was developed in conjunction with a post-doctoral fellow in the financial engineering department at Princeton University. The screen captures above come from the Portfolio Armor iOS app.