(Note from Tim: The original title of the post was “Protection Against Getting Annaly Raped” which, given the stock’s name, was kind of amusing……….but things are, ummm, a little touchy lately, so I thought I’d dial it back a notch!)

Shares of the real estate investment trust Annaly Capital (NLY) slid to their lowest price in 14 years on Monday. Despite the abysmal long term performance of this REIT, nearly 32,000 Seeking Alpha readers are signed up to receive updates on it, and it’s probably been the subject of more Seeking Alpha articles than any sub-$10 billion market cap name. So why have so many moths been lured to this particular flame? In a word, yield. As of Monday’s close, Yahoo! Finance calculated a forward dividend yield of 11.9% for NLY. Slim consolation for NLY shareholders down 28% over the last 52 weeks though.

Annaly highlights a hazard of investing for yield. Securities with high yields often have those high yields because their prices have declined, for reasons that will continue to put downward pressure on their prices. Had Annaly longs simply put their money in the SPDR S&P 500 ETF (SPY), they would have had a yield of only about 2%, but they’d be up about 19% over the last 52 weeks. Money is money, and investors with appreciated securities can always harvest some capital gains in addition to, or in lieu of collecting dividends. Nevertheless, for investors who would rather continue to hold NLY, here are a couple of ways of hedging it.

These were the optimal puts*, as of Monday’s close, to hedge 1000 shares of NLY against a greater-than-20% drop between now and April 18th. 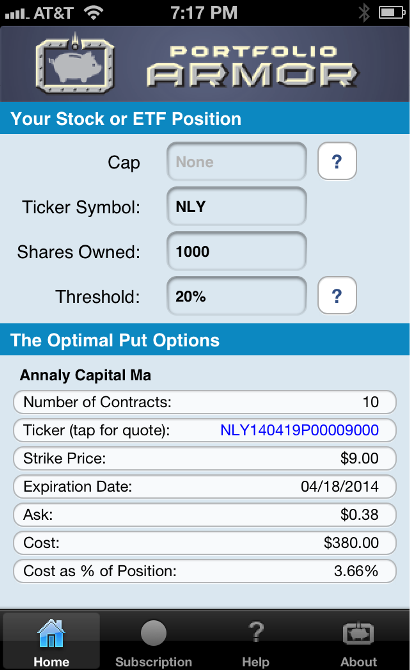 As you can see at the bottom of the screen capture below, the cost of this protection, as a percentage of position value, was 3.66%.

If you were willing to cap your potential upside at 20% between now and April 18th, this was the optimal collar** to hedge 1000 shares of NLY against a greater-than-20% drop over the same time frame.

As you can see at the bottom of the screen capture above, the net cost of this collar, as a percentage of position value, was only slightly lower at 3.18%. Recall that we saw a much larger reduction in cost from hedging with an optimal collar in this post on Celldex Pharmaceuticals (CLDX) recently. The reason there is relatively little cost savings with a collar in the case of NLY is that there is a lot less demand for out of the money calls on NLY. And there’s less demand for them because options market participants don’t see as much possibility of NLY climbing 20% over the next several months.

In some cases, hedges such as the ones above can provide more protection than promised. For a recent example of that, see this post about hedging shares of Tesla Motors, Inc. (TSLA).