In my last post (“A New Approach To Portfolio Construction“), I showed a couple examples of Portfolio Armor‘s new portfolio construction tool in action. You may recall our approach there in broad strokes:

That’s our approach when users start with a “clean slate” — that is, they don’t start with their own favorite securities. But in the comments on my last post, I asked Slopers for their favorite long ideas to use for a future post. A few mentioned ideas, but only BIGOLDED also gave me a “threshold” to use (i.e., the biggest decline he was willing to risk), so in this post, we’ll show a couple of portfolios based on BIGOLDED’s inputs.

BIGOLDED mentioned four securities: ERF,BWP,NCR,MGM, and said he didn’t want to risk more than a 6% decline in the value of his portfolio. He didn’t mention the size of his portfolio, so I’ve just picked $500,000 as a round number below. So, here’s how we go about creating a hedged portfolio for him.

Each Security Is Hedged

Note that in the portfolio above, each of the underlying securities is hedged. Hedging each security according to the investor’s risk tolerance obviates the need for broad diversification, and lets him concentrate his assets in a handful of securities with high expected returns net of their hedging costs. Here’s a closer look at the hedge for one of these positions, NCR:

This collar for NCR was capped at 4.07%, because that’s the six month expected return Portfolio Armor calculated for the stock. The threshold Portfolio Armor used here was 12% though, not the 6% BIGOLDED mentioned. The reason for that is that NCR was too expensive to hedge using a 6% threshold, so Portfolio Armor used a threshold twice as large, but reduced the position size by half so that the maximum drawdown of BIGOLDED’s portfolio was less than 6% (5.71% actually, as you can see at the bottom of the previous screen capture). Note also that the hedging cost for NCR here was negative, meaning BIGOLDED would be getting paid to hedge it.

Three Out Of Four Securities Included

The only one of BIGOLDED’s tickers that wasn’t included here was BWP, because, its net expected return was negative. MGM was included hedged as what we call a cash substitute — that’s a security collared with a tight cap (1% or the current yield on a leading money market fund, whichever is higher) in an attempt to capture a better-than-cash return while keeping the investor’s downside limited according to his specifications. MGM was hedged this way because it was too expensive to hedge otherwise using a 6% threshold.

The hedging cost of this portfolio was 1.96%, and its potential return over the next six months was 5.55%. In general, the higher the risk you’re willing to take (the larger your threshold), the higher your potential return. For an example of a hedged portfolio using a 20% threshold, see this post. If BIGOLDED felt the hedging cost of 1.96% was too high, he could run this again, using our second strategy, “Minimize Hedging Cost”. If he did, he would have gotten this portfolio: 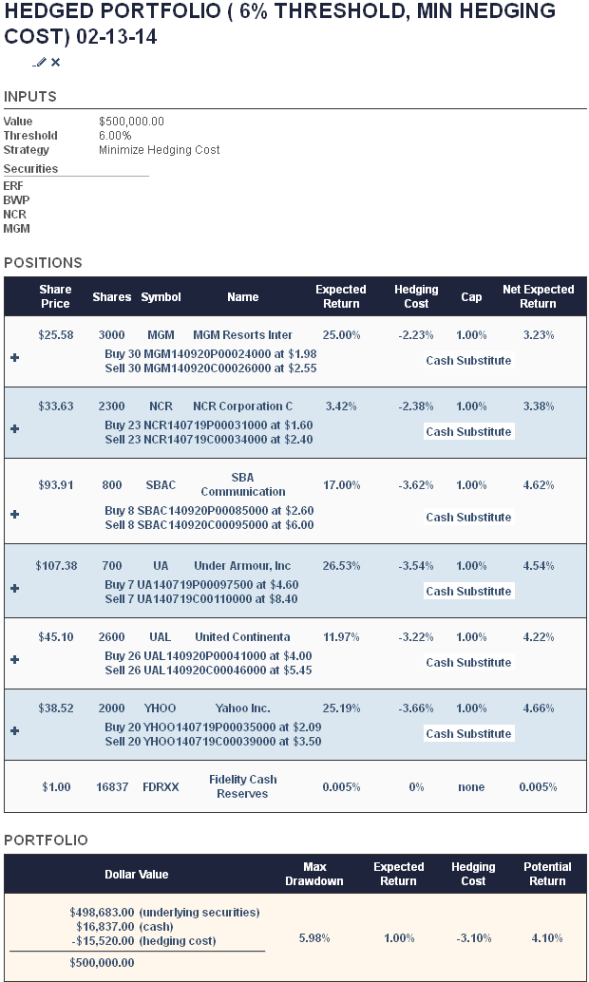 As you can see at the bottom of the screen capture above, the potential return of this portfolio over six months was a little bit lower, at 4.10%, but the hedging cost was negative in this case, -3.10%, meaning BIGOLDED would have gotten paid to hedge in this case.

The worst case scenario for this portfolio would be if each of the underlying securities went to zero over the next six months. If that happened, BIGOLDED would be down 5.98%. The best case scenario for this portfolio would be for each of these underlying securities to appreciate by more than 1% next week. If that happened, they’d get called away, and BIGOLDED would be up at least 4.1% (he might be able to make a bit more by selling the put legs of his collars).

If you’d like me to run more examples in future posts, feel free to leave the inputs you’d like me to use in the comments below — tickers (optional), dollar amount of portfolio, and the maximum decline you’re willing to risk, in percentage terms, over the next six months (your “threshold”).