In a post on Wednesday (“Gold’s Bull Market”), Tim highlighted a breakout in the chart for the gold-tracking ETF GLD. Last month, Tim noted he was bullish on gold miners as well in the longer term, though they could face a pullback in the shorter term. For those long the Market Vectors Gold Miners ETF (GDX), here are a couple of ways to hedge it over the next several months.

As of Wednesday afternoon, these were the optimal puts* to hedge 1,000 shares of GDX against a greater-than-15% drop over the next several months with optimal puts. 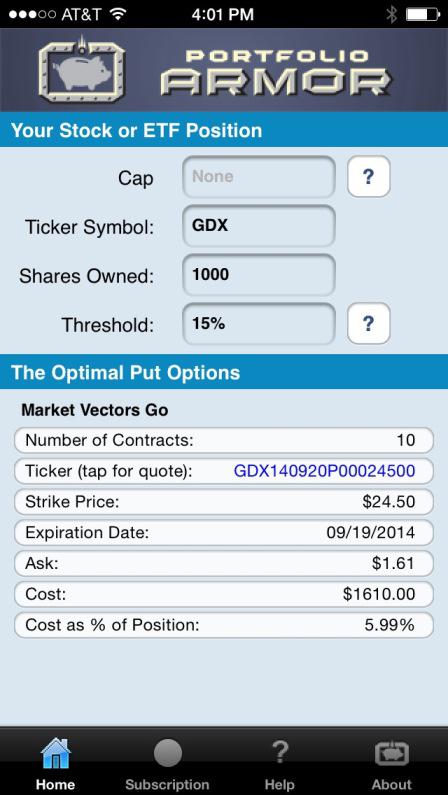 As you can see at the bottom of the screen capture above, the cost of this protection, as a percentage of position value, was 5.99%.

If you were willing to cap your potential upside at 15% between now and September 19th, this was the optimal collar** to hedge 1,000 shares of GDX against a greater-than-15% drop over the same time frame.

As you can see at the bottom of the screen capture above, the net cost of this collar, as a percentage of position value, was negative, meaning you would essentially get paid to hedge.

In some cases, hedges such as the ones above can provide more protection than promised. For an example of that, see this post about hedging shares of Tesla Motors, Inc. (TSLA).