We have been tracking the coming of an economic bounce phase for a few months now. This dates back to pre-Brexit when market sentiment was over bearish but leading economic signals from the Semiconductor Equipment sector and manufacturing were arguing for economic firming. Voila! We have since had ‘economic surprise’ indexes turn up and it is now two strong Payrolls reports in a row. Funny how leading indicators… lead.

But another component of this economic view is the prospect that this firming could come with an old friend that always shows up eventually after policy makers have been given too long a leash (and since inflationary policy has been in effect in one form or another since Q4 2008, I’d say that is a pretty long leash). Yes, our plan is currently operating to the Greenspan era blueprint, an inflationary blueprint that can see asset markets from the Precious Metals to Emerging Markets to Asia to US Technology rise in tandem.

This week I would like to present some indicators that would support the view that an inflation problem lurks not too far out on the horizon. Let’s start at ground zero, Gold vs. Commodities. Gold broke down from its uptrend first vs. Silver and then vs. Palladium (bottom two panels). It is wobbling vs. the CRB commodity index and Crude Oil.

Are Au-Ag and Au-Pd leading the way for a more widespread inflationary asset burst? Gold flat lined or under performed commodities for much of the Greenspan era bull cycle after being the first mover to the upside in 2001. Sound familiar? Gold led asset markets by bottoming in December 2015 and turning up in January 2016, while everybody else was ducking for cover. Now signals from within the precious metals complex indicate it is weakening vs. two precious metals that are more inflation sensitive (i.e. with more pro-cyclical industrial uses). If this is leading gold vs. commodities, we go full frontal Greenspan. 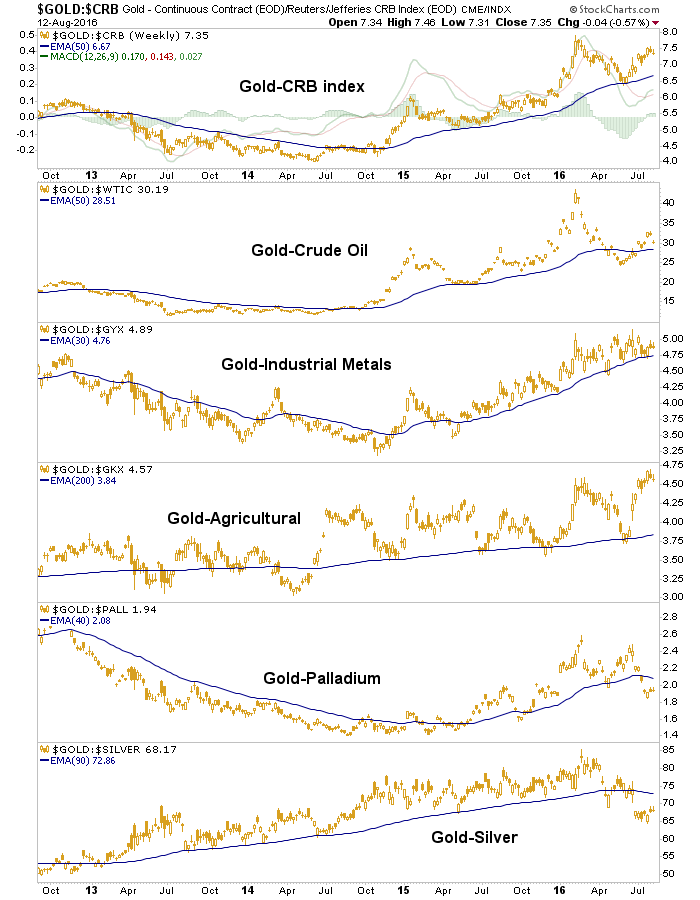 It will be important for the inflation case however, for commodities to turn up vs. the broad stock market just as gold turning up vs. stocks earlier this year was important to the case for the miners. So far, the commodity fund GCC is doing nothing vs. SPY and indicating inflation is non-existent as an issue. If you believe an inflation issue is coming, you’d want to position before this ratio gets on that theme because it would likely bring in the herds.

Our friends in Canada beg to differ (about GCC-SPY’s non signal) as the TSX-V (CDNX) has turned up vs. SPY. The ‘V’ is well known as an indicator to inflationary speculation.

We track TSX-V vs. the senior TSX each week and it has long since turned up.

Of course, one could argue that the bullish state of gold vs. major currencies is reason enough to expect inflation. Inflation is after all, the result of ongoing currency debasement. 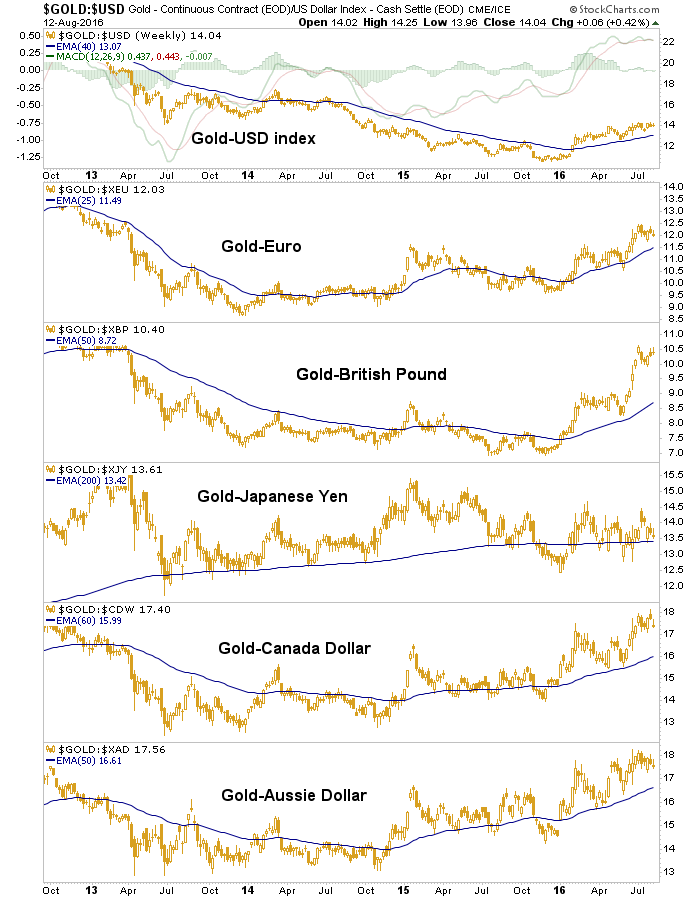 Within the gold sector, we find that junior miners tend to out perform during inflationary speculation phases. GDXJ led GDX into the top in 2011 when the last great inflation phase blew out. The ratio bottomed in early 2015 and made a positive divergence in early 2016 as the sector bottomed. This is a new trend and it implies an ‘inflation trade’ to come.

Finally, let’s take a monthly view of silver vs. gold. The silver-gold ratio held support and broke upward from its downtrend. We made a big deal about that when it was happening in real time, but the big picture quiets things down and shows what was in play when the ratio crashed in 2008 and what was in play when it blew off in 2011. Well, it’s been rising so far in 2016. That’s a first step to what could be an inflation problem that becomes more widely recognized by the markets in the coming months.

Just a few pictures for your consideration, arguing that inflation has not gone away. Well, we know that when we look at healthcare bills and services costs throughout the economy. We see it in recent manufacturers’ costs data. We are seeing it in early market indicators as well. The trick is to see it before it becomes readily obvious in Treasury bond spreads, nominal commodity prices and eventually, on CNBC!