As the EUR/USD Forex pair continues its rather steep decent during the past couple of months, it is approaching a critical major support level around 1.04, as shown on the Weekly chart below.

Not only will a drop to that level form a potential triple bottom pattern, it will also hit a triple confluence of long-term price, trendline and regression channel “mean” major support.

A drop and hold below 1.04 could see a catastrophic price plunge to levels (0.8827) not seen since October 2000. We may, however, see price overshoot and drop below 1.04 briefly, before a potential bounce occurs.

In this regard, it may also be worthwhile keeping an eye on the European Financials ETF (EUFN). As shown on the Daily chart below, price has recently managed to pop back above a major resistance level at 18.00 on a high volume spike.

But, major weakness in the Financials sector could bring about a catastrophic drop in the Euro. In that scenario, we’ll see whether the ECB has any bullets left in its monetary armory to prevent such an event. 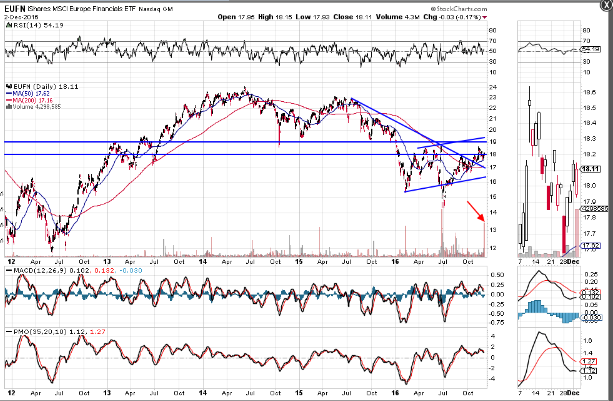