Every morning of the year, 365 times in a row, my first thought when I wake up is: what should I write about? Sometimes it’s easy, sometimes it’s hard, and sometimes I’ve got plenty of posts in the hopper and I don’t even need to bother. But this morning, facing the ninety-second day in a row of everything up a tenth of percent, I seriously can’t squeeze anything out to say about this confounded boring market we’re in. So, screw it, I’ll talk about something that happened yesterday that has nothing to do with this idiotic “market” we’ve been given.

Specifically, I was sitting in a chair at a fencing tournament. These big tournaments are all the same: housed in a massive convention center, with shouts and clanks bouncing against the walls, they are noisy, rambunctious, and saturated with hurry-up-and-wait mode.

What was unusual, indeed unprecedented, was that there was a yellow lab laying down next to my chair. She had one of those “service dog in training” vests on, so I didn’t bother her, but for a dog person like me, that’s very difficult. I will pick up a puppy without hesitation if it’s just a regular dog, but when they have that vest on, I do a decent job controlling my urge to pet them.

The woman sitting on the floor with the dog, however, seemed nice enough, and she probably sensed my dog-person frustration, so she said, “you can pet her if you like.” So I went into my professional-level ear scratching and belly rubbing and paid for the service with some conversation, because I’ve always been interested in these service dog trainers.

I learned some interesting things about her experiences:

I asked her if it was hard to say good-bye to each one, since I assumed it would be. Yes, she said, she cried every time (I would too). But then, a few weeks later, the organization would provide her another puppy, and her heart would be mended.

I just thought it was sweet to hear, and it broke the monotony of a relatively dull day. Plus it at least gave me a comment cleaner. So thank you, dogs, for all you do! 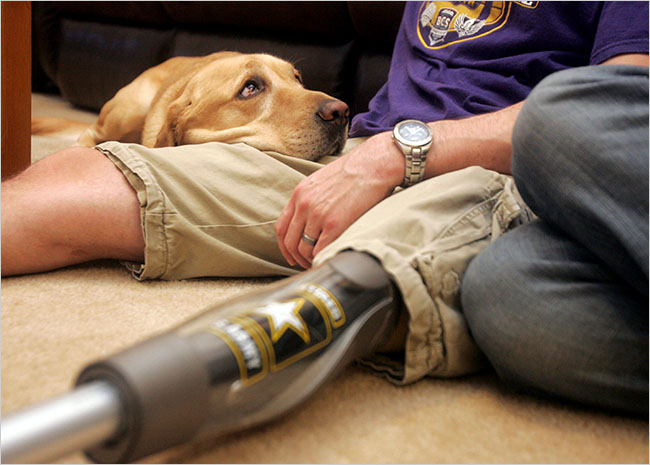