The monthly chart below of the South Korea ETF (EWY) shows January’s breakout to new all-time highs, followed by a brief pullback and rally back to close above its prior record high of 75.05 in March (now near-term support). Price is cautiously extending these gains, so far this month, while experiencing quite a bit of whipsaw movement on a daily basis.

It’s also sitting just above the bottom of a long-term uptrending Andrew’s Pitchfork channel around the 70.00 level (major support). Its next major support level is around 60.00 on this timeframe.

Both the momentum and rate-of-change indicators have been waning since last October, but remain above zero. A drop and hold below zero, as well as price drop below 70.00, could see price retest 60.00, or lower. 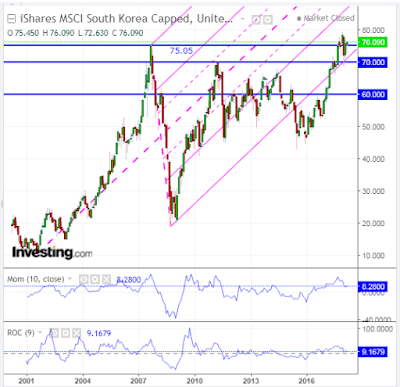 The daily chart below of EWY shows this whipsaw action (which began last October and which has formed a diamond pattern), and volumes have been high for the past couple of months.

Price is still above the 50-day MA and the RSI, MACD and PMO indicators have just formed a new “BUY” signal. However, this diamond pattern can be a bearish topping formation after a lengthy run up, so a certain amount of caution is warranted, especially with price near its recent all-time high.

Beware of a break with force on escalating volumes below the diamond bottom around 70.00 (which sits below the 200-day MA) as price could very well drop back to 60.00, or lower. 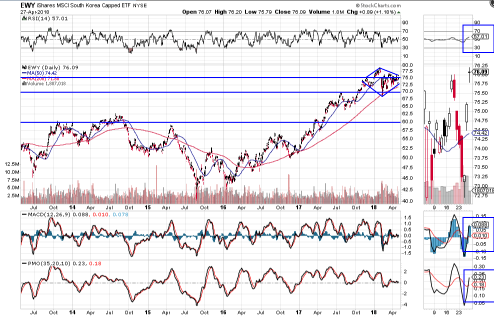 We’ll see what happens following Friday’s opening talks between the North and South Korean leaders to denuclearize the Korean peninsula and forge a peace agreement, and how further discussions may affect the EWY over the coming days/weeks, particularly in the lead-up to President Trump’s proposed meeting with Kim Jong Un in the next couple of months.

https://slopeofhope.com/2018/04/can-the-south-korea-etf-hold-onto-its-record-breakout.html
Can The South Korea ETF Hold Onto Its Record Breakout?