Over the course of writing thousands and thousands of posts on this blog (personally, about 15,000, although Slope itself has well in excess of 20,000), I take a certain amount of liberty with the topics I choose. By no means are all my posts related to charts or trading. Sometimes I talk about personal (but not too personal) stuff. This will be one of those posts.

This is just an off-the-cuff musing about how much the process of applying to colleges has changed since I was in high school. The reason this is on my mind is that my oldest child is enter the “hot zone” spanning end-of-Junior and start-of-Senior year during which applying to schools becomes a full-time occupation. I suspect I’ll be doing other posts about this adventure as the year wears on.

To set a baseline, I’ll share my experience from when I went through this. It won’t take long, because there wasn’t much to it. There were no consultants. There were no books I read. There were no seminars or college visits or any help at all from my parents. I didn’t do any prep classes, and I received no counseling from the school at all. All I did was take the SAT test, did a desultory job of filling out a few applications……….and I got into Princeton and Brown.

So let me repeat that, because for those of you who are parents of teenage children, what I just wrote probably sounds like science fiction. I did a completely lame-ass effort with zero assistance or preparation, and I got into two of the most elite schools in the world. I also, by the way, had fairly middling grades – – pretty much a B+/A- kind of student – – and my SAT wasn’t particularly high at all. What set me apart, I suppose, was that I had written a number of books about computers as a teenager, which back then made me kind of an interesting freak.

Let me go on to say that the same Tim Knight applying to the same schools today would be laughed (loudly) off the campus. I doubt they’d even let me tour. Because I am 100% certain that in the current environment, Princeton, for example, could announce that it is selling 10 spots to its forthcoming Freshman class at $10 million apiece, and they would sell EVERY single one. I am dead serious.

Look, for a moment, at the latest acceptance rates at Harvard: it has ground down to 4.59%. In other words, over 95% of the applicants, the vast majority of which are superb students, are told to go piss up a rope. 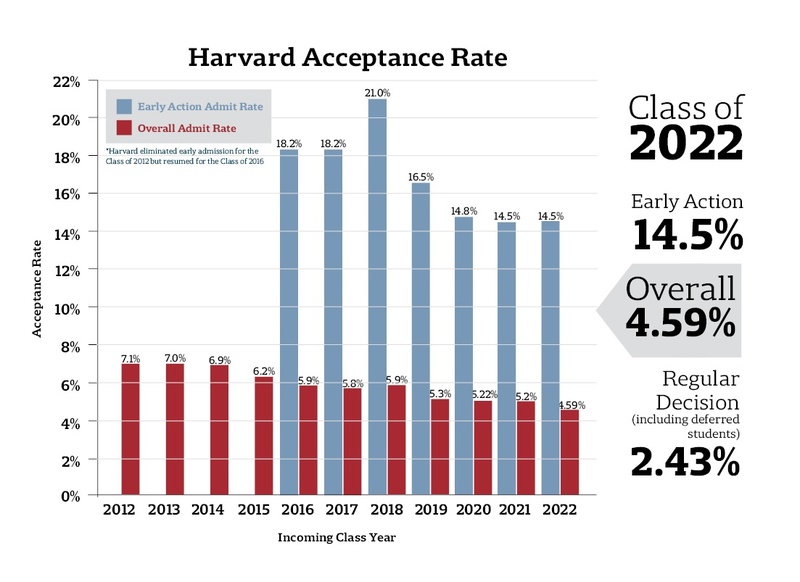 Back when I was applying to schools, the most oh-my-God, I-can’t-believe-how-hard-this-is acceptance rates were about 11% (the likes of Stanford and Harvard). The University of Chicago, which these days has an acceptance rate 7.1%, had an admission rate of something like 80% – – if you had a pulse and a pencil, they’d let you in.

So what changed since I was a kid? Well, I guess a few things:

Let’s take another look at how things have changed: 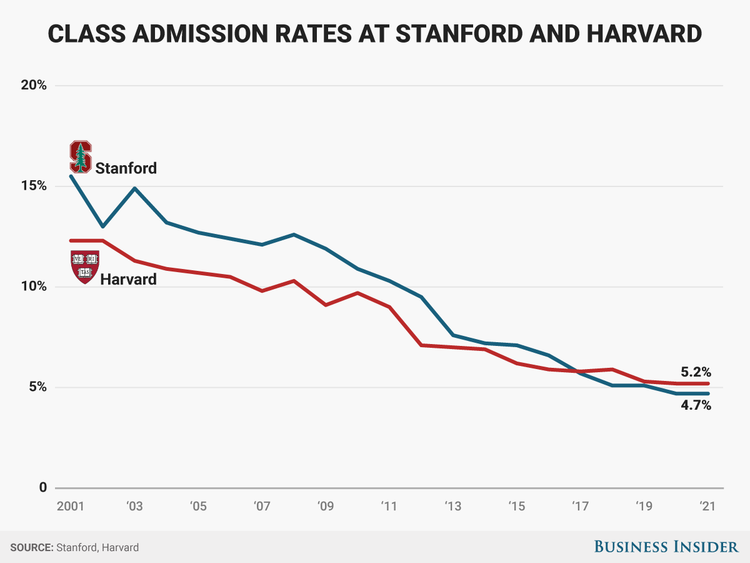 So even in the span of this millenium, it is THREE TIMES HARDER to get into these schools now than it was at the start. And people have fetishized acceptance to the point where you will actually see sites dedicated to  what a letter of acceptance looks like. I have got to believe there are some parents out there that excuse themselves to the restroom to spend some private time with such images.

What I find funny, in a perverse way, is how a dumbshit like me was able to get into super-elite schools, whereas my child – – who, my hand to God, dwarfs any intellect I ever had – – is going to have to move heaven and earth to achieve the same thing. It strikes me as unfortunate. These days, particularly around where I live, if you get into Stanford, people figure you walk on water and juggle at the same time.

Naturally, particularly in the world of private schools, the playing field is not level. Here again, if I was applying these days, being (a) white and (b) a male would not exactly win me big points with the admissions committee. Indeed, during my examination of the stats out there, I found out it is literally over 200% easier for a female to get into CalTech than a male. They are so desperate to have a 50/50 ratio that they throw the doors wide open for any females applying. This isn’t an opinion. This is a mathematical fact publicly issued by the institution.

I have every confidence my child is going to get into a variety of superb schools. I stand in awe, however, of how much this aspect of life has changed from when I was the child to when I am now the parent. This trend cannot continue, or else they will require applicants to have cured cancer to be considered for admission. These are just prospective college freshmen, for God’s sake. It’s breathtaking to me that these institutions demand extraordinary and mesmerizing achievements from seventeen year old kids. It’s too bad. But it is reality for the parents of today.