Price action on the following monthly chart of China’s Shanghai Index has been under the bearish influence of a very long-term downtrending Andrew’s Pitchfork channel since it peaked in October 2007 and bottomed the following October.

After a weak attempt to break out above this channel at the end of January of this year, it retreated and is currently dropping early Tuesday morning following President Trump’s latest threats several hours ago to impose tariffs on an additional $200 billion worth of Chinese goods in connection with their recent trade war. It has broken below its near-term major support level of 3000 that I had identified in my posts of April 9 and February 16.

If this index returns to its channel “median,” it’s in for one heck of a plunge! Look for a break and hold below its last swing low at 2638.30 to continue its current downtrend on this monthly timeframe. It’s already in downdrend on the weekly and daily timeframes following its failed channel breakout attempt and the momentum indicator is firmly in downtrend on all three timeframes.

Otherwise, it will have to, first, fight its way back above what is now major resistance at 3000 before attempting to make a new swing high on this timeframe above 3684.57. 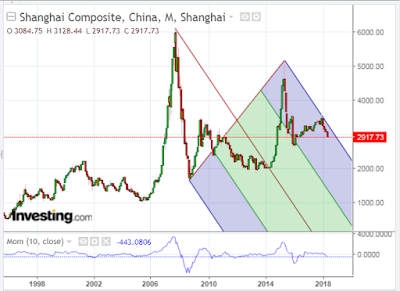