The Tesla Roadster Elon Musk had SpaceX launch into space. An apt metaphor for the performance of Tesla shares in 2020 (image via Quartz).

Adding A New Source Of Alpha

We added a new source of alpha to our security selection process at the end of May, one that put Tesla (TSLA) and other winners in our top ten names. Here, I explain what it is, and how to find it. Let’s begin by looking at our top ten names from June 4th.

Our Top Names On June 4th

In addition to Tesla, we had Netflix (NFLX), Nvidia (NVDA), Shopify (SHOP), the iShares 10-20 Year Treasury Bond ETF (TLH), Okta (OKTA), Atlassian (TEAM), ProShares Ultra Gold (UGL), Chipotle (CMG), and Twilio (TWLO). Of those names, our system selected all except TLH in part because of the new source of alpha. Here’s how they’ve all performed since.

The New Source Of Alpha

Broadly speaking, we look at two things when selecting securities: past returns, and forward-looking options market sentiment. The past returns part involves looking at the average 6-month return of each security over the long term (over the last ten years, if it’s been around that long; if not, we use an industry competitor as a proxy for stocks and we use the period since inception for ETFs). We then average it with the most recent 6-month return. Basically, we look for names that have been going up, and we assume their returns will start to revert to their long term means. Then we adjust our estimate up or down based on options market sentiment.

The new source of alpha is a new way of gauging options market sentiment. Specifically, we scan for an optimal, or least-expensive, collar to hedge each security against a greater-than-9% decline over the next several months, while capping its upside at 1% or the current money market yield, whichever is higher. Then we look at the net cost of the collar. We want the net cost to be as negative as possible.

Scanning For That Source Of Alpha

Since Tesla is a current top ten name as well as a top name from June 4th, I’ll use it to illustrate. Since interest rates are negligible now, money market yields are too, so we’ll use 1% as the cap when scanning for the optimal collar on Tesla. You might be able to approximate this screening process manually, but I’ll demonstrate an automated way. These are the inputs we enter: 1% for the cap, TSLA for the symbol, 100 for the number of shares (you could use any round lot for this), and 9% for the threshold. 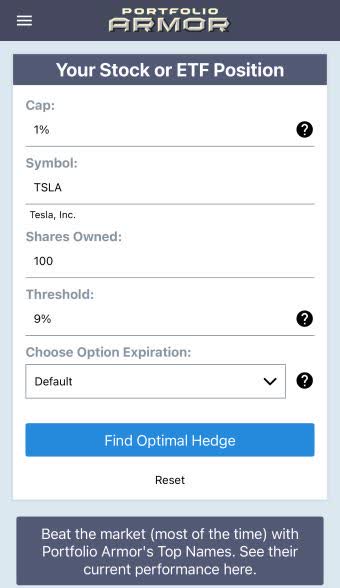 We keep the options expiration setting at the default, which looks for options expiring in approximately six months. Then we tap “Find Optimal Hedge”. This is the output: 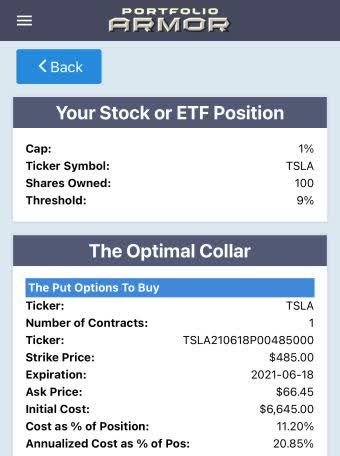 The part we’re concerned with here is the net cost of the optimal collar toward the bottom. Specifically, the net cost as a percentage of position, which was -9.62%. Among securities with positive returns, that was the most negative value in our universe on Thursday. But given current market conditions, a net hedging cost of -6% or less using these parameters would signal this source of alpha as well.

Ebbs And Flows Of Alpha