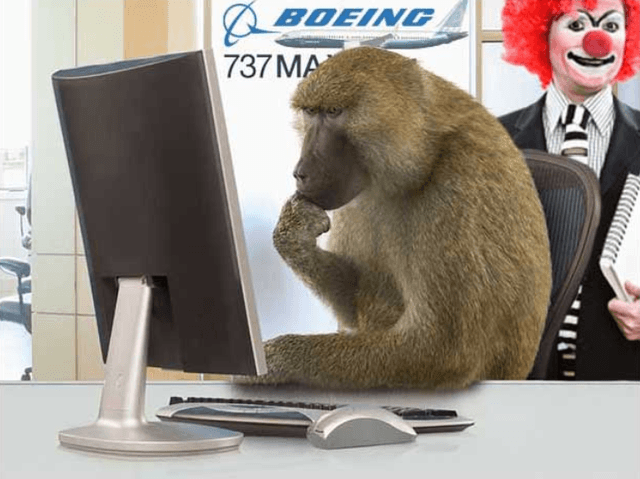 Artist’s conception of the Boeing 737 MAX design process (photoshop via Hiking in the Light).

(Note from Tim: I deleted a section here since it touched on political events).

Unlike Lion Air crash in Indonesia in 2018, the plane that crashed earlier this month was a “classic” 737. That is, it wasn’t a 737 MAX with the maneuvering software coded in part by $9 dollar per hour Indian contractors. Experts are still working on the black box from this crash. So far, this latest crash has only been fatal to everyone who was on board Sriwijaya Air flight 182, and not to Boeing’s share price.

In the event revelations about the crash cause Boeing shares to crash, we’ve posted a couple of hedges for it below. First, a quick note on our ratings of the stock.

A Top Name In September And November

To our surprise at the time (“Betting On Clowns And Monkeys“), Boeing was one of our top ten names in September, alongside Tesla (TSLA) and Shopify (SHOP). Since then, Boeing’s up 30%.

Boeing was also a top name of ours on November 12th, alongside Plug Power (PLUG). Since then, it’s up a little more than 15%.

Currently, Boeing is not one of our top names.

For these examples, we’re assuming you have 100 shares of Boeing and can tolerate a drop of 20% over the next several months, but one larger than that.

As of Friday’s close, this was the optimal, or least expensive put option to hedge 100 shares of BA against a >20% drop by late August. 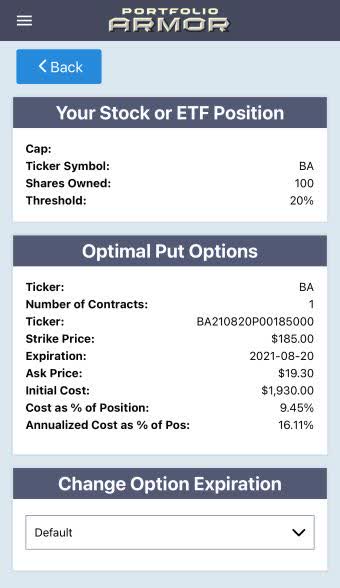 Here the cost was $1,930, or 9.45% of position value, calculated conservatively, at the ask (in practice, you can often buy options at some price between the bid and ask).

If you were willing to cap your possible upside at 20% over the same time frame, this was the optimal collar to protect against a >20% drop. 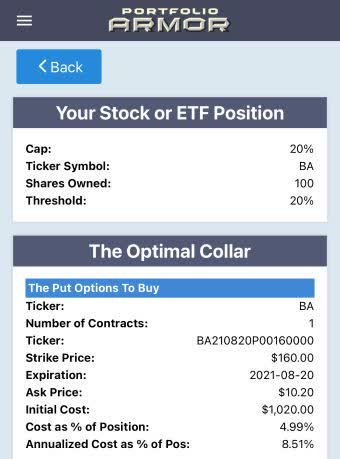 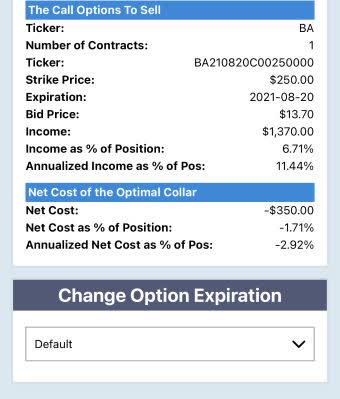 For this one, the net cost was negative, meaning you would have collected a net credit of $350, or 1.71% of position value, when opening this hedge. That’s assuming (to be conservative again) that you placed both trades at the worst ends of their respective spreads.