After Wednesday’s chaos in the Capitol, corporate brands from Chevron to Axe Body Spray used their Twitter accounts to weigh in on it.

According to the company’s press release, the partnership will position PLUG to expand in Asian markets:

[T]he companies intend to form a strategic partnership to accelerate hydrogen as an alternative energy source in Asian markets. Through this partnership, Plug Power and SK Group intend to provide hydrogen fuel cell systems, hydrogen fueling stations, and electrolyzers to the Korean and broader Asian markets. In conjunction with this partnership, the companies have also entered into a definitive agreement for SK Group to make a $1.5 billion strategic investment in Plug Power and are announcing a plan to form a joint venture company in South Korea to support the rapidly growing Asian Market.

In the wake of that news, shares of PLUG spiked more than 35% on Thursday.

One Of Our Top Names From November

Each trading day, our system analyzes total returns and options market sentiment to estimate potential returns for thousands of stocks and ETFs. We post our top names on our website each trading day. Since we added a new source of alpha last May, the returns of our top names have consistently beaten the market. Plug Power was one of our top ten names on November 12th, along with iShares Silver Trust (SLV), Nvidia (NVDA), Amazon (AMZN), Boeing (BA), Zoom (ZM), Peloton (PTON), Groupon (GRPN), and the Global X Lithium & Battery Tech ETF (LIT).

And after Thursday’s price action, PLUG led the pack, up 101.66%. We’re still bullish on PLUG – it was our 11th ranked name as of Thursday’s close – but below are a couple of ways longs can limit their risk if we’re wrong about it now.

For these two examples, we’ll assume you’ve got 500 shares of PLUG and can tolerate a decline of 25% over the next several months, but not one larger than that.

These were the optimal, or least expensive, put options to hedge 500 shares of PLUG against a >25% drop by mid-June as of Thursday’s close. 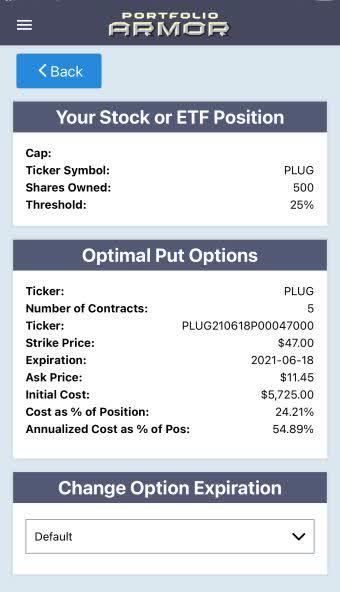 This and subsequent images are screen captures via our iPhone app.

Here the cost was quite high: $5,725 or 24.21% of position value (calculated conservatively, using the ask price of the puts; in practice you can often buy them at some price between the bid and ask).

If you were willing to cap your upside at 16% over the same time frame, this was the optimal collar to hedge against the same, >25% decline. 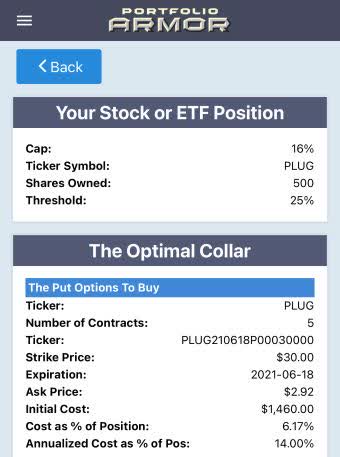 Here the net cost was negative, meaning you would have collected a net credit of $2,790, or 11.8% of position value when opening this collar. That’s assuming you placed both trades – buying the puts and selling the calls – at the worst ends of their respective spreads.

Which Hedge Is Best?

That depends in part on your cost sensitivity, but this is how our system decides whether to use puts or collars to hedge a particular position.