Options started trading on Coinbase (COIN) on Tuesday, so longs can now hedge their shares in the crypto platform. We’ve posted a couple of hedges for the company below, in the event Anatoly Karlin’s prediction of a crypto crash this year comes to pass.

Before we get to those, let’s clear up a bit of misconception about the company’s IPO last week.

No, Insiders Didn’t Dump Most Of Their Shares

One misconception about the Coinbase IPO last week is that insiders dumped most of their shares. That was exemplified by tweets such as the one below, by Peter Schiff.

First a bit of context regarding Schiff: he runs a gold company, and lamented last month that his son had gone all-in on bitcoin.

So, that may have colored his thoughts on Coinbase to some extent. As to Schiff’s claim that Coinbase CEO Brian Armstrong dumped 71% of his shares in the company: no. The percentages Schiff referred to are of the shares set aside for the direct listing. In Armstrong’s case, that amounted to about $292 million worth of shares. Armstrong owns 19% of Coinbase; his total stake was worth about $8.3 billion as of Tuesday’s close. With that in mind, let’s look at how new Coinbase shareholders can stay long while limiting their downside risk in case the crypto winter starts this year.

For both of these hedges, we used the January, 2022 expirations to cover all of 2021 (there’s also a January, 2023 expiration for Coinbase options now). In both cases, we scanned for hedges against a greater-than-23% decline, because that was the smallest decline you could hedge against while using optimal puts.

These were the optimal, or least expensive, puts, as of Tuesday’s close, to hedge 200 shares of Coinbase against a >23% decline by next January 21st. 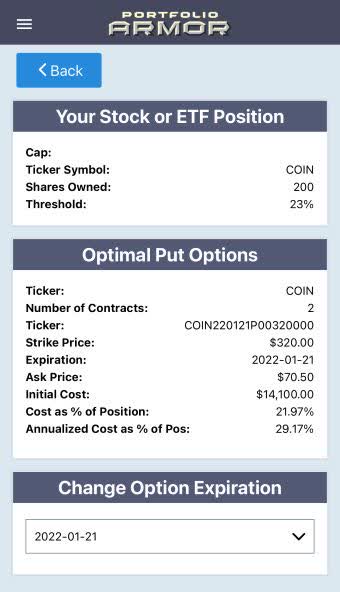 This and subsequent screen captures are via the Portfolio Armor iPhone app.

You can see above why 23% was the smallest decline threshold available on Tuesday: the cost of protecting against a >23% decline was a whopping 21.97% of position value. Hedging against a smaller decline would have cost more than the decline itself. That cost was calculated at the ask, to be conservative, but it’s still extremely expensive. By way of comparison, the cost of hedging Goldman Sachs (GS) against the same, >23% decline by next January was 3.4% of position value.

If you were willing to cap your possible upside at 35% by next January, this was the optimal collar to hedge 200 shares of COIN against a >23% decline over the same time frame. 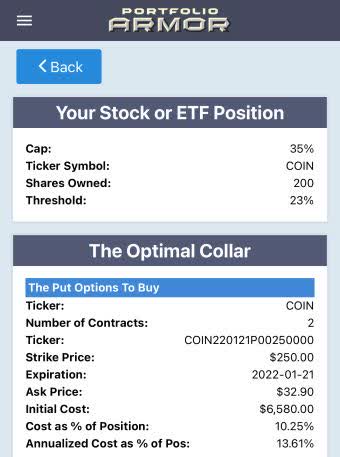 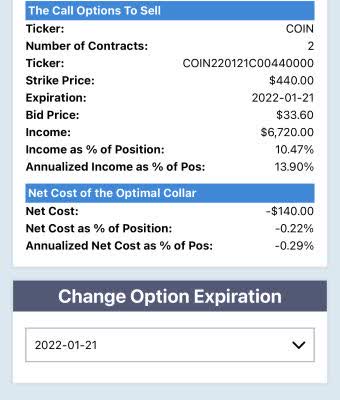 For this hedge, the net cost was negative, meaning you would have collected a net credit of $140 when opening the collar. That’s assuming you placed both trades at the worst ends of their respective spreads, buying the puts at the ask and selling the calls at the bid. In practice, of course, you can often buy and sell options at some price between the bid and ask.

A point we made in a previous post is that crypto can be both a bubble and technologically transformative. That was the case with the dot-coms in the late ’90s.

Theglobe.com (TGLO) went public in 1998 and had the largest post-IPO price spike in history, that was a bubble. When Amazon (AMZN) hit $400 per share in 1998, that was a bubble too. The Dot-com bubble nevertheless spawned transformative technologies and industries. Most of the Dot-com companies, such as Theglobe.com, ended up being essentially worthless. A few, such as Amazon, became trillion dollar+ oligopolies.

If they think Coinbase will end up being the Amazon of the crypto bubble, hedged investors can use their appreciated puts to buy more of it after a crash. If they’re not sure, they can exit, while strictly limiting their downside risk.