Trying Not To Think About Viacom

We had been trying not to think about ViacomCBS (VIAC). Yeah, we knew it tanked after Bill Hwang’s Archegos Capital blew up last month.

But we hadn’t thought much about it since then until Tuesday, when we tried to watch the Real Madrid versus Liverpool Champion’s League match on Viacom’s Paramount+ app.

$5.99 per month to watch something on TV that you used to be able to see on basic cable, and the stream kept freezing.

What The Heck Is This?

So we were a bit surprised to see that our system had selected Viacom as one of its top ten names on Thursday.

Each trading day, our system analyzes price signals and options market sentiment to estimate potential returns for thousands of stocks and ETFs. It ranks the names that pass its initial screens by their potential returns over the next six months, net of hedging cost. On Thursday, 2,096 securities passed our system’s initial screens, and the ten names that ranked the highest are what you see above. ViacomCBS was our #3 name.

On our site’s backend, we started collecting a bit more data on past returns for our top names. We’ve had success in the past screening names by the mean of their most recent 6-month return and their average 6-month return over the long term (10 years, in the case of stocks that have been public that long; for stocks that haven’t, we use an industry proxy; and for ETFs that haven’t, we go back to inception.). We started adding three columns looking at similar means for weekly, monthly, and quarterly returns. Below, we’ve circled the mean of Viacom’s most recent monthly return and its average monthly return over the last 10 years.

If that number was too small for you to read, it was -22.66%. Is a negative figure there a bullish or bearish signal? We’re going to crunch the numbers with thousands of top names in our sample going back a few years and find out whether it is or not, on average. Either way, if the effect is significant, we will use it as a calibration factor to help us select future top names, and we’ll keep tracking the magnitude of the effect and updating the calibration factor accordingly every trading day. In the meantime, it will be interesting to see how Viacom does over the next 6 months.

In Case We’re Wrong About Viacom

According to Bloomberg BusinessWeek’s profile of Bill Hwang, his mentor, Julian Robertson, instilled in him the idea that it’s okay to be wrong:

As Hwang recalled at the reunion, Robertson taught him a key lesson: to live with losses. At one point, Tiger had burned through $2 billion in a wrong-way bet against the Japanese yen, and “everyone was panicking.” Robertson entered the room and, according to Hwang, said, “Guys, calm down. It’s only work. We do our best.”

These were the optimal, or least expensive, put options to hedge 1,000 shares of VIAC against a >20% decline by mid-September as of Thursday’s close. 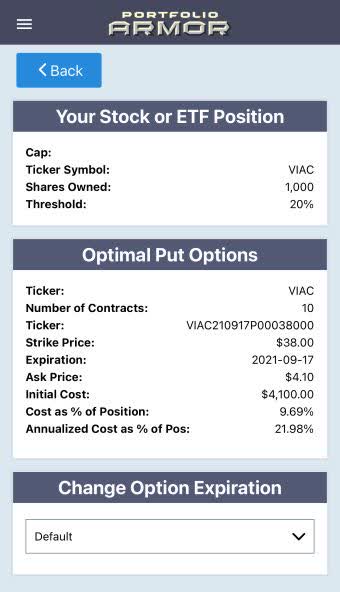 This and subsequent screen captures are via our iPhone app.

The cost there was $4,100, or 9.69% of position value. That was calculated conservatively, using the ask price of the puts. In practice, of course, you can often buy and sell options at some price between the bid and ask.

If you were willing to cap your possible upside at 30% over the same time frame, this was the optimal collar to hedge against a >20% decline. 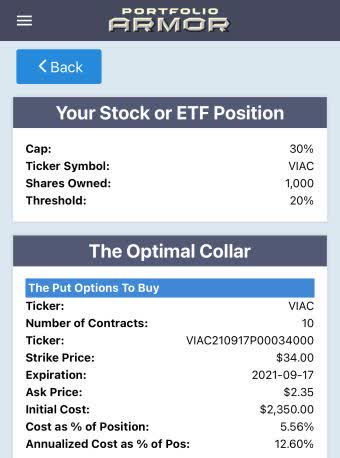 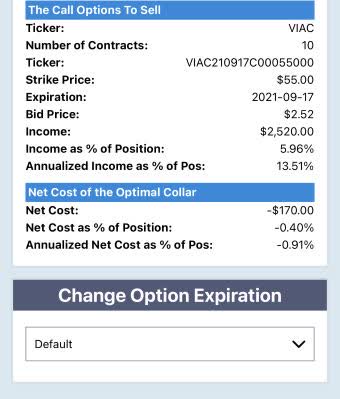 With that collar, the net cost was negative, meaning you would have collected a net credit of $170 when opening it. That’s assuming, to be conservative, that you placed each trade at the worst end of its respective spread, buying the puts at the ask and selling the calls at the bid.