In a post last week (Shades Of 2000 And 2008), we mentioned TD Ameritrade lead anchor Oliver Renick’s prediction that if Bitcoin didn’t stop crabbing and start rallying on inflation news, it could sell off, tanking the whole crypto sector. Since then, Bitcoin is down about 20%, and the next biggest cryptocurrencies have dropped as well. Granted, that may have had more to do with Elon Musk’s actions than any sudden realization about Bitcoin’s lack of reaction to recent inflation news. As we mentioned in a subsequent post (Tesla Stops Taking Bitcoin), a crypto correction was in Musk’s interest:

If we had to guess why Elon Musk suddenly became concerned about the fossil fuels powering Bitcoin mining, it’s because a correction in crypto is in Tesla’s interest. First, it might take a cooling off of the crypto market to get speculators to start looking at Tesla calls again. And second, it will give Musk an opportunity to buy crypto at a lower price.

We speculated there that the crypto Musk might buy would be Ethereum, since the proof-of-stake model it’s migrating too is much less energy intensive than Bitcoin’s proof-of-work mining. Our friend Andy Swan quipped that Musk might launch his own Tesla coin.

We wouldn’t rule that out. In the meantime though, Musk has continued to put downward pressure on crypto.

The Impact Of Elon Musk’s Tweets

Musk’s tweet last week that Tesla would no longer accept Bitcoin for purchases knocked the flagship crypto currency below $50,000, and then with this one-word reply, he knocked it down below $45,000.

Nevertheless, as of a couple hours later, Bitcoin hadn’t recovered much, hovering near the $45,000 level.

Hong Kong-based investor Puru Saxena offered a more bearish near-term assessment, noting that previous corrections had taken Bitcoin down to its exponential moving average, which would imply a drop to $15,500 this time.

Given that the primary appeal of Bitcoin has been its capital appreciation, what effect that would have on newer crypto speculators will be interesting to see. If Elon Musk (and stock investors) are lucky, they’ll start looking at stocks again. With that in mind, let’s look at our current top names, which include Musk’s Tesla along with some crypto-related stocks (which will likely get clobbered if Bitcoin hits its 200 EMA, so be sure to hedge if you buy them).

As of Friday’s close, these were our system’s top ten names.

Why Falling Crypto Stocks Are In Our Top Ten

That raises the question of why they are in our top ten, given that those names are selected based on analysis of their total returns as well as options market sentiment. One reason is that their six month returns are still positive.

The first step in our screening process is to look at the mean of a security’s average 6-month return over the long term (usually, the last ten years) and its most recent 6-month return. It’s possible this catches some names that are already rolling over, so we recently started looking at similar means of 1-week, 1-month, and 1-quarter returns. We expected that past top names that had negative 1-week, 1-month, and 1-quarter returns at the time we selected them would have underperformed the ones with positive mean returns, but we found the opposite was the case. That may change in the near future, and if it does, we’ll adjust our selection process accordingly.

The second reason those names are in our top ten is that they have highly negative hedging cost when tightly collared against a greater-than-9% decline over the next several months. In Tesla’s case, that looked like this on Friday. 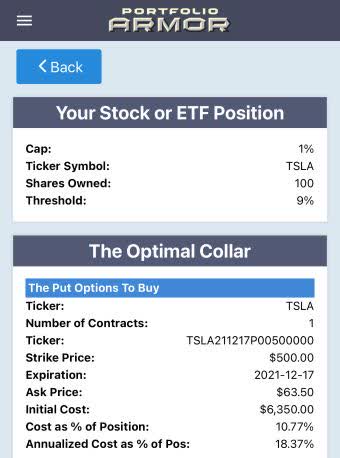 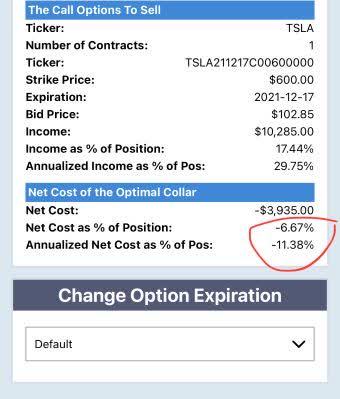 Since we’ve been tracking that particular gauge of options market sentiment, securities with similarly negative hedging cost when collared that way have outperformed our other top names by an average of 29% over six months. We update that figure over trading day, as returns from top names selected six months ago come in. It’s possible this signal peaked around November 3rd, with the performance of this top names cohort.

Its average outperformance when that cohort finished on May 3rd was about 31%. Again, if it continues to drop, we’ll adjust our selection process accordingly.

Over the long term, our goal is to identify peaks and troughs for these signals, so we can start using them when their performance looks set to increase and stop using them when it looks like it’s about to peak.