There were many new three year highs on equities yesterday, and even the recently lagging transports index caught up to make one too. With the new high on the Dow yesterday that gives us another Dow Theory Buy Signal. It would be hard not to regard this as very bullish, and I won't be trying to put a bearish interpretation on it. Here's yesterday's impressive move on the Transports index on the daily chart: 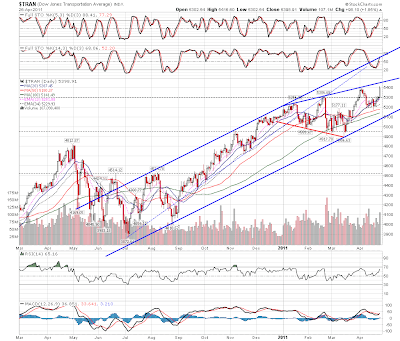 Something that does look somewhat bearish though is the reversal yesterday on NQ at the upper trendline of the rising channel I posted. I suspect that NQ will soon break that resistance trendline but until it does there is the possibility of a significant reversal here:

On the bigger ES picture, the neckline on the big continuation IHS broke yesterday. There's some negative divergence on the 60min RSI but if ES can hold above the IHS neckline for a day or two then it should become effective support. A return to test 1319 already looks much less likely:

Everyone's looking at the Fed meeting today wondering whether the Fed will offer some support to the stricken US dollar. If it doesn't then a continuation down looks very likely. EURUSD has now broken up from the resistance turned support upper wedge trendline that it has been hugging recently and the next obvious target is the 2009 high at 151.44:

There has been much speculation in recent days about whether equities can continue rising without a pullback on oil. Looking at the oil futures daily chart that pullback on oil may well be building now, as oil has reversed at a rising resistance trendline, and has then double-topped with sharp negative divergence on RSI. Unless oil can break through to new highs with confidence, the obvious next target is the gap support (and possible H&S neckline) in the 96 area:

The big wild card today is the Fed meeting and press conference. I'm doubtful that the Fed will pay much more than lip service to a stronger US dollar, but lip service might be good for a short-term bounce on USD so I'll be watching it carefully. Meantime the short term picture looks fairly bullish and I'm be watching resistance on NQ to see whether NQ can break that and the Feb high at 2404 with conviction.

There's been a lot of talk about how the US Dollar is indispensable as a reserve currency, and that foreign holders of US treasuries will therefore continue to build holdings indefinitely regardless of a disintegrating USD and the obvious fiscal incontinence of the US government. It was Charles De Gaulle though who famously remarked that the graveyards are full of indispensable men, and while the reserve currency graveyard is somewhat smaller, the same is doubtless true of reserve currencies as well. If nothing is done to support the US Dollar here then a rebalancing away from USD towards a basket of reserve currencies wouldn't actually have a big impact on anyone other than the US. It will be interesting to see whether the Fed takes any steps to support USD here, though their track record for forward thinking over the last fifteen years would suggest that they won't.