SPX has not reached my downside target, but regardless of that I am seeing some signs of bottoming now and it could be that we have seen the swing low. The March lows weren't actually my primary targets for this move down. The March low on SPX just happened to be slightly above my target support trendline. Nonetheless the March lows are obviously a significant support level, and I've been looking at the NDX and RUT charts where both have now hit the March lows and are finding some support there. Here's how that looks on the NDX chart: 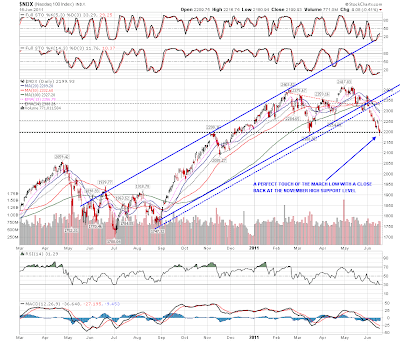 There's a similar picture on the RUT chart, and these support levels are all the more significant for being potential H&S necklines of course. There's therefore the potential for a very large bounce here to make right shoulders on both: 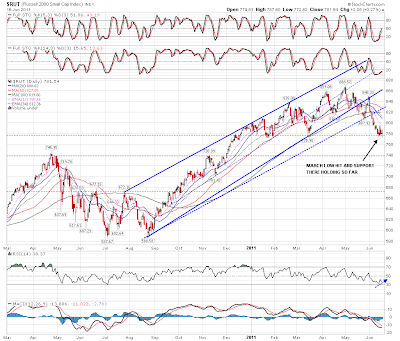 The futures charts are at critical levels too, and as I have now identified a declining channel on ES as well as the TF channel, and Brinkley's NQ channel, both of which I posted yesterday morning, we now have clear declining resistance trendlines on all three charts. ES has risen since I capped this chart and is now testing that declining channel resistance level at 1271. A break above would be very bullish:

NQ is still some distance away from declining channel resistance, which I have in the 2217 area:

It is TF that looks most bullish this morning however, as the declining channel there broke up yesterday. TF crawled down the broken trendline overnight and has broken up from that this morning. There is strong resistance not far above at 793.8 and I have that as the upper boundary on a small rectangle that has formed this week. A break above 93.8 would therefore target 815:

Vix closed above the daily bollinger bands for a second day yesterday, and closed the first of the two gaps that I highlighted in my morning post. Two closes above the Vix bollinger bands is a rare event, and three closes are rarer still.The chances are that Vix will close back within the bollinger bands today and if we then get a lower close on Vix on Monday we will have a Vix buy signal for equities. Something to watch closely: 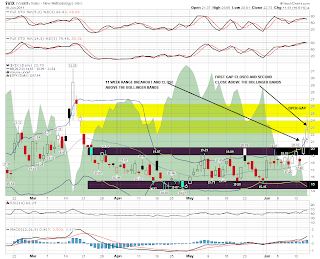 EURUSD rallied strongly from the support levels I was talking about yesterday morning and is close to retesting the H&S neckline at 1.43. A move back to the neckline after an H&S has already played out halfway to target generally suggests to me that the H&S has failed and I have an alternate resistance trendline, currently at 1.437, that would be the resistance trendline on a broadening descending wedge that is forming on EURUSD. That resistance trendline has not been confirmed by a third touch yet however and there is also a resistance level at 1.434 that's worth bearing in mind:

Oil looks divergently bearish this morning, and of the three support levels in the immediate area, two were broken overnight. The first level was support at 94, then a rising trendline slightly below, and the third was the upper trendline of the right angled and descending broadening formation at 92.2 from Dec to Feb, which is holding so far. A break below 92 should deliver a move back to the mid-80s:

If we have seen the swing low that it didn't bottom in the area that I would expect a major low to be made. Instead equities will be bouncing at candidate necklines for H&S patterns on all three of SPX, NDX and RUT, which would be strongly suggestive of another move down to at least test these levels later in the summer. If however we are see another move to new lows in the near future, I think Vix and the breaking declining channels are telling us that such a move would have to happen today or Monday. There's little sign of it happening today so I'll be watching Monday carefully. While I've been writing ES has broken the declining channel there and the next serious resistance trendline I have is at 1285. Have a great weekend everyone. 🙂