There's little appetite for austerity in Greece, as we've all been seeing from the intermittent riots over the last few months. The Greeks announced yesterday that they would be putting the latest Euro bailout and greek partial default plan to a referendum and obviously the plan may get rejected. I have found no date for this proposed referendum looking round this morning, so this bump on the road may affect markets for quite a while yet.

Kudos to my friend Alphahorn for calling the high and going in heavily short there. He's given me permission to post his current primary count after yesterday's bearish break and he is expecting new lows from here on that count: 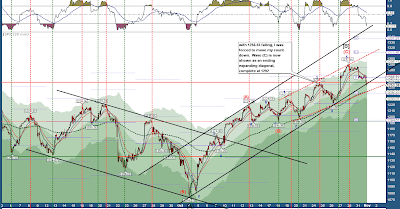 He also suggested I post his NDX chart where there's a very nice looking bearish gartley pattern that has now also topped out: 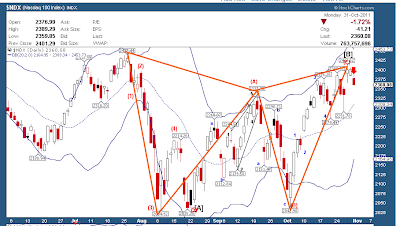 I'm not entirely convinced about the greater bear case here, and I won't be until we see ES break down through major support at 1185 with conviction. In the short term I'm seeing strong support at the potential H&S necklines at 1216.5 and 1185. ES has already made a lower low below 1216.5 since I capped this chart, but 1216.5 hasn't yet broken with conviction. Until it does we may well see a strong bounce here, albeit that bounce may just be to form a right shoulder:

EURUSD has broken support at 1.39, then broken rising support below there. Since I capped this chart it has reached the strong support level at 1.365 and is bouncing there so far. That is also a potential H&S neckline of course: 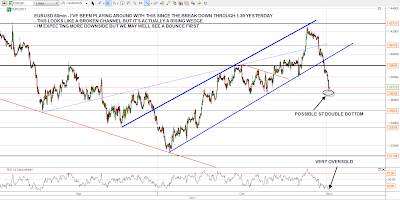 How seriously am I taking the bear case here? Very seriously. This rally has mainly been about an expectation that a bailout deal would be agreed in Europe, and that deal may now unravel entirely. The support breaks yesterday were serious and there are a number of very large H&S patterns forming. I posted the EEM chart last week pointing out the potential H&S there. Here's the updated chart after a move to where I suggested would be the ideal right shoulder top: 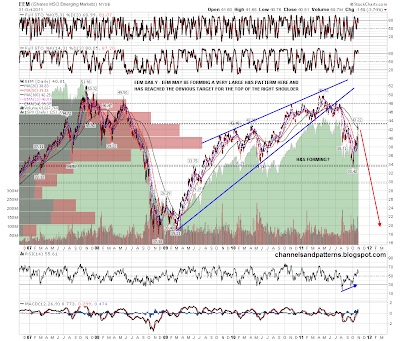 I posted the TF daily chart last week before the last spike up suggesting that we might see a move higher to double resistance in the 770 area. TF reversed there after testing the H&S neckline and broken bull market rising support, and if it moves back to the neckline then that is in the 600 area:

I've posted the big H&S that may be forming on GBPUSD a few times, and while it hasn't reached the ideal level for the right shoulder, the broken rising wedge on the hourly chart is suggesting that it has topped out: 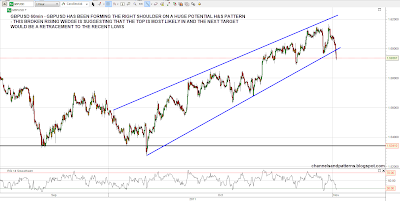 The bulls aren't out of the game yet though. ES is still well over 1185 support and I'm still watching the possible H&S forming on 30yr Treasury futures (ZB). When I capped this chart a couple of hours ago I suggested on the chart that the right shoulder shouldn't really go over strong resistance at 142. That's being tested now and a break with confidence over that would be a major bullish break on ZB that would look very bearish for equities:

ES has now broken below the strong support level at 1216.50. We may see a bounce here but I'm expecting to see main support at 1185 tested during the next few days. The key support levels that I was going to mention today were 1216.50 on ES, 1.365 on EURUSD and 142 resistance on ZB. As I write they are ALL breaking and if that persists into the open then we might well be looking at a test of 1185 on ES before any significant bounce.