That was an impressive move up on Friday, and my double-bottom targets on ES and NQ were both made and a little more. Everyone seemed to be getting very bullish on the day's action, but as I mentioned in the morning, there's a strong possibility that we were just seeing a strong oversold bounce. Overhead resistance on SPY is still at declining resistance from July and the daily 200 SMA, and there's nothing much to get really excited about on the long side here until we see those break: 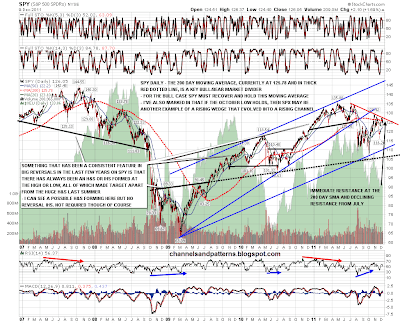 Obviously there is a strong long scenario here, and the ZB and Vix charts that I posted on Friday give two levels that need to hold for the ideal bear scenario. Meanwhile though, the strong push down and recovery that we saw on Thursday and Friday last week is often characteristic of a strong move down beginning, and I still think that there's a distinct possibility that we see that this week. On ES the retracement from Friday's high has found support so far at the broken rectangle and that needs to break for the bear case this week. If it does break then I have a very nice declining support trendline established that is suggesting a test of the 1200 area:

On NQ I also have a nice declining support trendline established. I'd like to see the declining resistance trendline I've marked in hold for the bear case:

So why am I leaning bearish this week? Mainly because the EURUSD and CL charts look weak, and commodities and treasuries have not really confirmed the strong move up on equities yet. I'm expecting some Santa rally, but it isn't Xmas quite yet. I've been talking for a few days about the possibility that EURUSD might make a double-bottom, and that's looking pretty good here, though EURUSD is holding short term declining support at the moment: 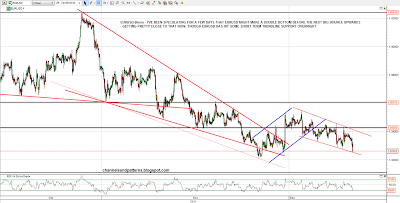 The oil chart looks bearish here, and we might see a very sharp move down this week. I have an H&S that has formed in the short term, and a decent looking double-top that I've been mentioning for days. On a break of 95 with conviction the double-top target would be in the 86.65 area: 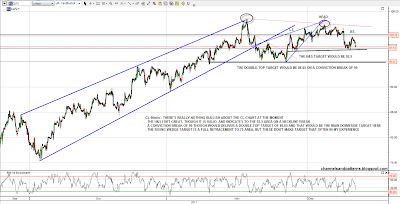 In the very short term ES and EURUSD are bouncing at support levels and we might see that bounce extend into the open.