Some are born great, some achieve greatness, and some have greatness thrust upon them.

I'm a Shakespeare buff so you'll to put up with the odd quote. This one is from Malvolio in Twelfth Night and the relevance today is that the same sort of gradation could be applied to trendlines, which might then go:

Some trendlines are clear early, some become clear later, and some arrive so late that you've stopped looking for them

In this case the low yesterday on SPY and SPX was at rising support from the December 19th low. I've been complaining for weeks that the there was no decent support trendline from there, and I wasn't even looking for it yesterday. Nonetheless, it is now established and it is now therefore also clear that we are looking at a rising wedge from that Dec 19th low. We might yet see a new high within that rising wedge, but it should be marginal. Wedge resistance is under 1330 SPX and I'd be extremely surprised to see the wedge break up with confidence here. Here's the updated setup on the SPX 30min chart with the wave count: 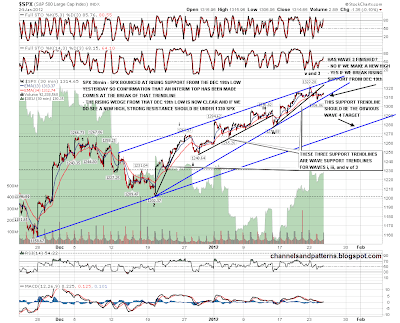 Rising wedges are a classical EW setup and are called ending diagonals there. It's worth mentioning that these tend to be final (5th) wave patterns though it's hard to see how that could be the case here. Something to bear in mind though. If we are near a major top, the first signal would be a break of rising support on SPX from the November low marked on both the chart above and the chart below. The second and much more serious break would be a break, not far below that, of rising support from the October low. If that breaks I would expect that a major top should most likely be in. I have sketched in the highest probability paths from here as I see them over the next few weeks and if you look closely at the chart below you'll see that I have left open the possibility that we see a very short term slightly higher high on SPX before breaking wedge support: 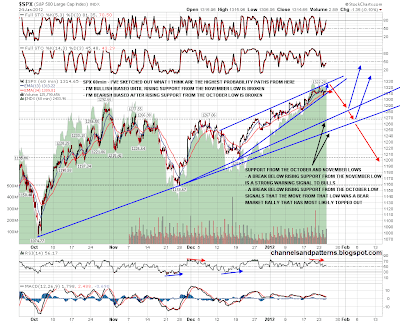 Vix closed up yesterday and the Vix Sell (equities) Signal that triggered at Monday's close is now confirmed. That doesn't necessarily mean that an interim top is in, but historically, with occasional exceptions, it means that a significant interim top should be close. I've marked the last two confirmed buy signals on the chart below and would draw your attention to the declining resistance trendline from the October Vix highs. A break above that in the near future would be a warning signal for equity bulls: 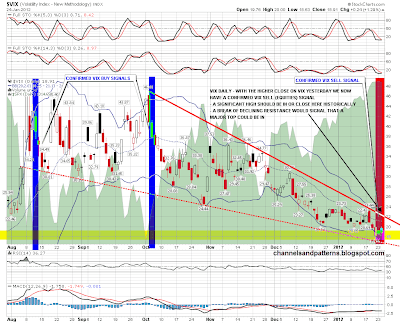 I was outlining the possible reversal setup on ZB yesterday, and the falling wedge evolved into a declining channel which has now also broken up. This now looks like a double or W bottom and a break above 141'25 would indicate to 142'28, just below some resistance at 143. That move on ZB would look bearish for equities: 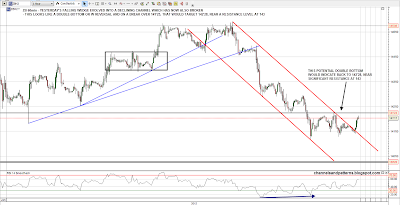 The setup on EURUSD looks really very interesting this morning. The possible high I was looking at yesterday has held and a double-top has now set up with a target at 1.2845. Now I mentioned yesterday morning that the 1.285 area would be the ideal low for the large IHS that may be forming on EUR, but 1.285 is also a potential H&S neckline that would indicate back to the lows. I'm expecting a move to the 1.285 area shortly, and most likely we will see a bounce there. Somewhere in the (ideally) 1.295 to 1.30 range we would then see a break which should lead to one or the other playing out. I've marked both options on the chart with the short term double-top and the two highest probability paths from here as I see them:

Could the stricken Euro really rally to 1.35? I posted the supportive looking setup on USD yesterday, but my line in the sand is on GBPUSD, which is a better inverse indicator of likely USD direction as it isn't currently suffering from serious solvency issues. The dividing line is clear on GBPUSD, with the black support trendline being the neckline on a monster H&S I've been posting for the last few months as it has formed. Shorter term however I'm watching the declining channel and a break above channel resistance should signal that USD will retrace further and allow EURUSD to bounce to the 1.35 IHS target: 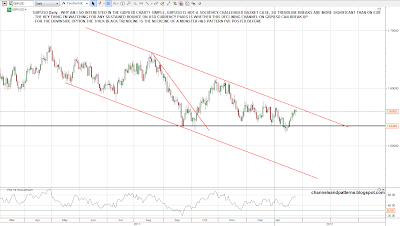 So what are going to see today? The Fed announcement today is a huge wild card that may send markets up or trigger confirmation of the correction that may have already started. Many are expecting QE3 to be announced but with improving economic figures, SPX back over 1300, NDX at ten year highs, and earnings looking generally decent, why would the Fed announce QE3 now unless the intent is nakedly to devalue USD, which might trigger a competitive devaluation currency war that has so far been avoided since the 2008 crash? QE3 enthusiasts seem likely to be disappointed today.

In the very short term support is just above yesterday's SPX low in real trading hours. ZB & EURUSD are both pushing equities south but positive divergence on the ES 5 & 15min RSIs is suggesting a decent bounce before any major support break, supported by a nice looking W bottom on the ES 1min at the moment (at 1307 ES as I write). We'll see. We could see a marginal new high today but the rising wedge should cap any move under 1330 SPX and that should just deliver a better short entry. I'm leaning long on balance for today as long as yesterday's lows hold. If they break or SPX breaks over Monday's high I'll switch to leaning strongly short.