SPX came within three points of hitting the 1340 level yesterday, but short term this looks like a bounce area. On the SPX 15min chart there was clear positive RSI divergence at yesterday's low, and the primary target for any bounce is the possible IHS neckline at 1365.74 and declining resistance from the high in the same area. If that is broken there is another possible IHS neckline at 1373.91: 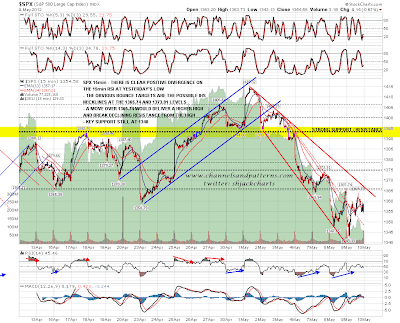 That 1365.74 area really is key today. Breaking over it would deliver a higher high short term, break declining resistance to open up further upside, and it's also the area for the neckline of the upsloping H&S on SPX that has broken downwards as you can see on the chart below. There is some (barely detectable) positive divergence on the 60min RSI as well that I have marked on the chart: 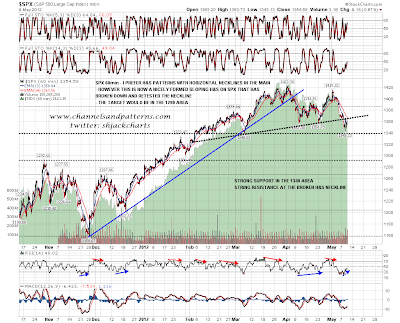 There is clear positive divergence on the EURUSD 60min RSI and a bounce there is very much on the cards. The obvious target is declining resistance from the last high in the 1.304 area: 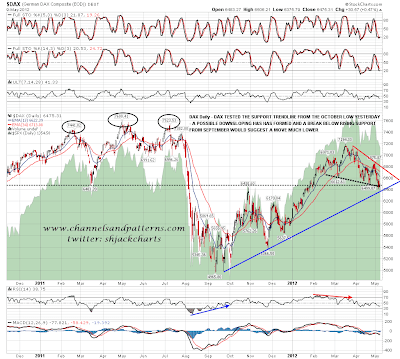 I haven't posted any commodity charts in a few days so I thought I'd close with some today. I've been posting my big picture gold chart on and off for the last three months and gold has broken my first support level and is testing the second. If this support level breaks then I'd be inclined to write off the possible IHS forming. This current level is the last level of trendline support. On a break below it I have some support in the 1500 area and below that I'd be expecting a drop into the 1230-1330 area: 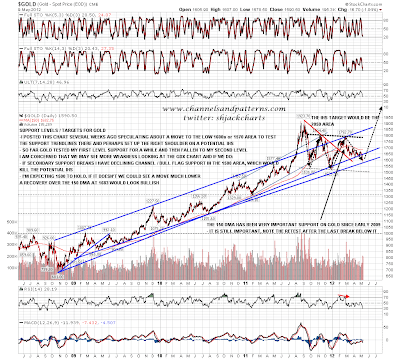 I've been having a look at the longer term WTIC chart for the bigger picture on oil and the overall cast of the chart looks bearish. There was a rising channel from the 2009 low that broke down in 2011 and the rising wedge that formed from the subsequent 2011 low failed at broken channel support and and broke down itself at the end of March. The wedge target is the 2011 low, but there is some decent potential support in the current 95 area. A break below 94 would suggest a return to the 70s: 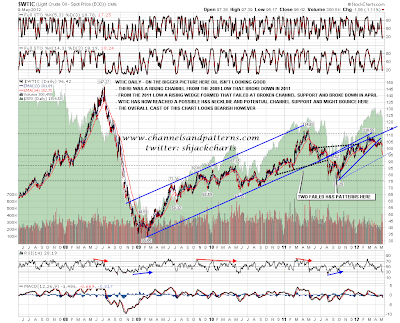 Natural gas has been in a decline for so long that it seems hard to imagine it trending up. Nonetheless a possible low setup is forming and it has made a short term higher high. If NATGAS can make it over declining resistance in the 2.65 area then the downtrend from last June should be broken: 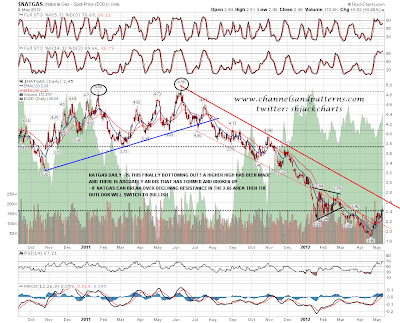 Overall the setup for a bounce looks decent here, with the obvious caveat that with ES at 1362 at the time of writing, that bounce has already reached the major resistance area I was looking at on SPX at 1365.74. A gap over that at the open would look bullish and if we see that I'd expect a run to the 1373/4 area and very possibly higher. It's worth noting though that with the ominous bearish patterns on so many index charts this would very possibly just be a rally to be followed by more downside, and that is particularly true on EURUSD, which may be the key driver of market direction over the next few weeks.