The big news on Friday was that SPX tested, and went slightly below, the October high at 1292 SPX. That area was also the target for both the double-top, and sloping H&S, on SPX so those patterns have now played out to target and can be disregarded. 1292 SPX is a strong support level and we may see a bounce here: 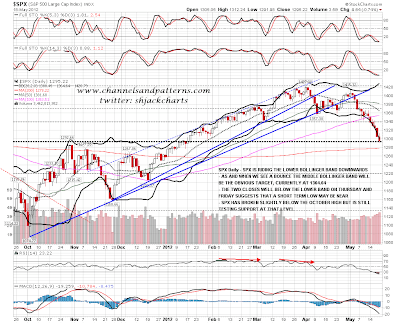 On the SPX 60min chart I have a possible declining channel that might deliver a bounce here. If we see that, and depending on how long that took, I'd be looking for a target in the 1320-30 SPX area: 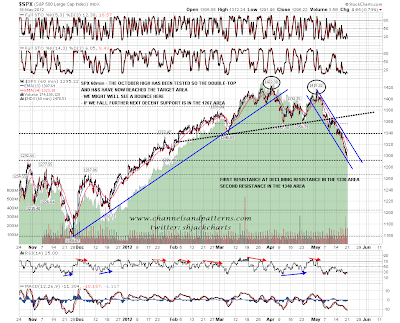 I would like to see a bounce soon as without bounces it's hard to establish decent trendlines. I don't have any three touch trendlines established from the high on SPX yet, but I do have a shorter term trendline from the 1340 level on the ES 15min chart that I'll be watching this morning. That has four touches and ES has reversed there twice overnight. A break above that, currently just over 1300 ES, would open up a larger bounce:

I was saying on Friday morning that EURUSD looked ready to bounce and gave two declining resistance trendlines as targets. It has broken the first of those and reversed at the second so far. That's good news as it has delivered a decent three touch declining resistance trendline from the 1.33 area last high. I'll be watching that to see whether it breaks and also the 1.2813 support/resistance level that it reversed at with the trendline touch. A break above opens up a possible retest of the 1.30 area:

Is it likely that this decline on equities has played out? I don't think so, and I'll post a couple of charts to show why I'm expecting more downside, possibly after a bounce. The first is the nice H&S on RUT, which has a target in the 720 area. RUT is currently testing the 750 area so there's still some way to go there: 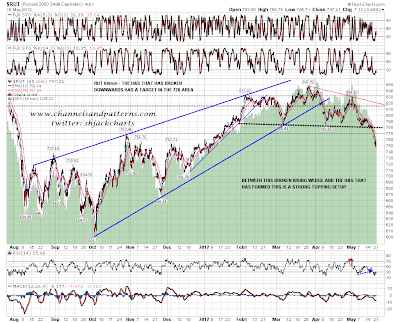 The second is the triple top on TRAN. There may be some reading this as an H&S but in my view the first two tops are too close together so it works better as a triple top IMO. The target there is 4,687.71 and Friday's low was 4,864.56, so again there's some way to go there: 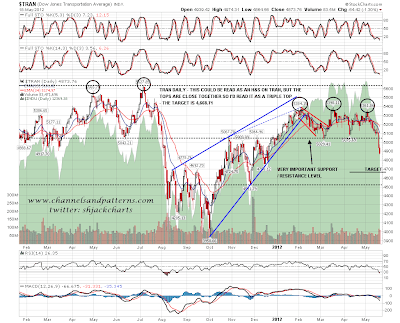 The third is on the Vix, which needs to be taken with a slight pinch of salt as Vix is not a directly tradable instrument. Nonetheless there is a clear IHS there indicating to 28.5 area and a gap that would be filled in the 26 area. I'm expecting at least the gap fill before any significant low, and on a break above possible channel resistance in the 27.5 area, I'd be looking at the other unfilled gap just over 34. Either way this seems too low for this Vix move to top out here: 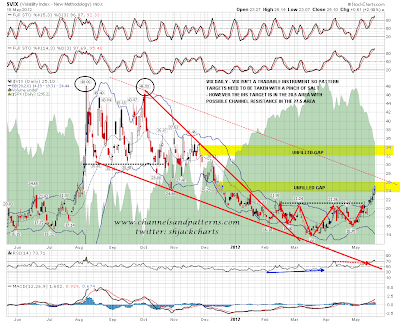 For today a bounce is definitely possible and I'll be watching those declining resistance trendlines on ES and EURUSD. If they break up then we will most likely see a decent relief rally before (most likely) the downtrend resumes.