Further to my post of June 29th, I thought I'd show where the Dow 30, S&P 500, Nasdaq 100, and Russell 2000 Indices are currently trading in their 2012 Q3 timeframe relative to the prior quarters. In that post, I mentioned that if the Q3 candle retested the Q1 lows again, I'd be very skeptical of much of a convincing advance above this year's high during these three months.

As can be seen on the updated Quarterly charts below, the current Q3 candle did, indeed pullback, but hasn't quite retreated to the Q2 lows, although the Nasdaq came close. Instead, an "inside" candle has formed, with price near the top on the Dow, S&P, and Nasdaq. The Russell is the laggard in roughly the middle.

As you can see, with the exception of the Nasdaq, these markets are trading in the vicinity of their price levels of the pre-2007/08 financial collapse and face major resistance up to their all-time highs. The candle action, so far for Q3 tells me that markets are attempting to garner bull support to advance further and retest those all-time highs. However, a failure to rally and hold above this year's highs will tell me that these markets are, indeed, weak at these levels, and will likely fall back, possibly to the middle of their large trading range (retreat to their "mean').

Due to the increasing weakness and unemployment problems that the global economies are facing, along with ever-surfacing financial improprieties (all of these problems have escalated since 2007/08), and the impending "Fiscal Cliff" in the U.S., it's my opinion that the latter is the more likely scenario without a concerted global intervention that addresses all economic, fiscal, and monetary problems as a complete package…and, by this, I mean real action and not just empty innuendos and temporary monetary tactics by world bank and political leaders…the sluggish and choppy action on the Q2 and Q3 candles confirms this lack of confidence by market participants at the 2007/08 levels. 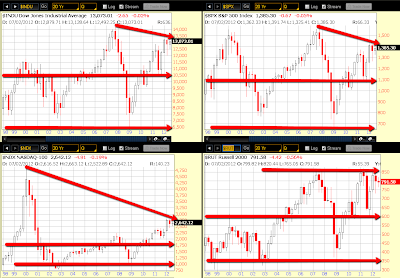