SPX has been pushing up the upper bollinger band on the daily chart as I was suggesting it might well do. A landmark was reached yesterday when SPX reached the 14-3-5 target area for the IHS from the low. Making that target was a long and winding road and it is no longer in play. Worth noting on this chart that SPX rising channel resistance is slightly north of 1420: 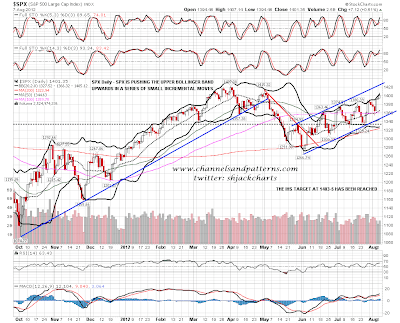 On the 15min chart a slightly rough rising channel has formed since the spike up on Friday.Channel support is slightly under 1400: 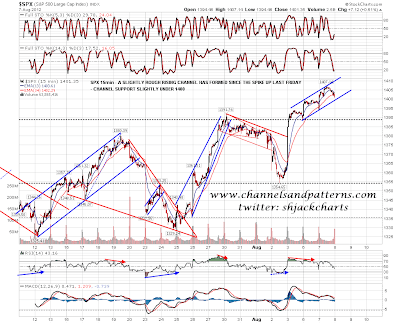 ES looks interesting here. I'm showing the full chart with overall rising channel of the move since the June low to put it in context. We may have a rising wedge forming from the late July low and there's some reason to think that we might now see a move to test support on that in the 1365-70 area. A weak trendline formed and has broken on strong negative divergence on the 60min RSI. I don't like the weakness of the trendline but I like the overall setup. If we see that retracement I would be seeing that as a buyable dip:

There's reason to think that we might see some retracement on EURUSD as well. The rising wedge scenario there is looking increasingly good and a short term double-top has formed as I mentioned it might yesterday. On a break below 1.234 the double-top target is in the 1.224 area but the real target would be the possible rising wedge support trendline in the 1.22 area:

On CL I've noticed that the rising wedge that broke down has developed into a rising channel. Channel support at 88.4, channel resistance at 98.4 and there are pattern targets still in play in the 95 to 95.5 area:

If we are going to see a major bull run for the rest of the year, which I have to say I still think is unlikely, then what happens on bonds here is key. I'm concerned on the TLT 60min chart to see that a very ugly but perfectly valid downsloping H&S has formed and is testing the neckline. There is very strong support in the 123.5 to 124 area that I would like to see hold to support the larger bear scenario on equities, but if it breaks, then the H&S target is in the 121.5 area and there is also a larger scale double-top target at the next big support shelf in the 116.5 to 117 area. If we see TLT break down below 123.5-4 with any confidence that will look very bullish for equities: 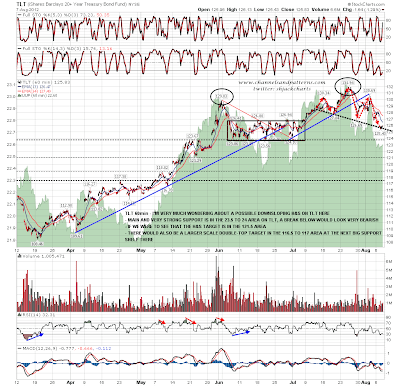 Short term I'm liking the short side today. The small double-top on EURUSD is breaking down and there's a nice setup on ES suggesting that we may see a move into the 1365-70 area, which would fit with a retracement into the middle bollinger band on the SPX daily chart. If that happens that would look like a dip worth buying.