The first thing to say today is that SPX returned to hit the top of the daily bollinger band on Friday. This means either that we will now see a retracement, or that further gains are likely to be smaller daily incremental gains as SPX pushes the daily upper bollinger band higher: 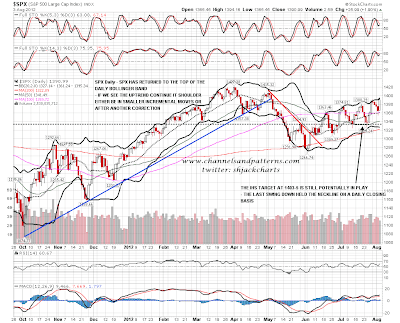 I'm leaning towards at least a small retracement or consolidation today as SPX hit declining resistance from April at the high on Friday, and that is holding so far, and we're seeing some negative divergence on the SPX 15min and ES 60min RSIs. What we don't have, due to the strong rise on Friday, is a support trendline on SPX so it's harder to call a short term high. Some retracement or consolidation today may establish one. Here's the SPX 15min chart: 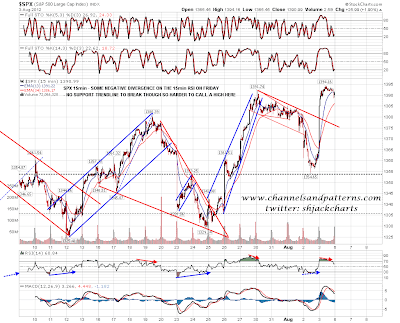 I'm leaning towards more upside though for a couple of reasons. One of those is that NQ has now clearly broken up through resistance on the range of the last few weeks, and has established a small rising channel from late July. Only on a break below this channel would this setup start looking bearish. As with ES there is some negative divergence on the 60min RSI here:

Another reason I'm leaning bullish is because of what happened on oil on Friday. The descending triangle I showed on Friday morning broke up, rather to my surprise, and while these are bearish patterns generally, they actually perform best on a break up, so the target is the 95.5 area with an 88% chance of reaching that. This can also be read as a W or double-bottom, another high probability pattern with a target just over 95. Either way, more upside looks likely and the overnight action looks like a bear flag. This bull setup supports equities to a degree:

A further reason I'm leaning bullish is because of EURUSD. I didn't show the EURUSD chart on Friday but I sketched in a possible sloping IHS neckline then, and was rather shocked to see the pattern completed overnight. It looks unbalanced but given that ideally both shoulders bottom in the same area even on a sloping IHS, it's actually a pretty decent pattern. The upside target is in the 1.28 area on a break over the neckline. If the neckline holds this might alternatively be a rising wedge forming:

On the fundamentals side we were all waiting to see the ECB exposed as all hat and no cattle last week, and we saw that. However the markets have rallied regardless. That looks bullish to me and the technicals are leaning bullish here on balance too. We'll see.

On the bigger picture I suspect we are seeing the possible double-top form that I have mentioned a few times since the June low. The second top could top out anywhere between here and the 1440 area SPX pivot, and I was looking at that in detail in my weekend post  at MarketShadows here. This scenario gives an overhead target range within another 50 points or so for the move from the June low, on a break over the declining resistance trendline from April that was hit at Friday's high.

In a normal presidential election year we would see a powerful rally for the rest of the year here, and I've talked about that possibility in my weekend post as well. The key there would be a conviction break over that 1440 area SPX pivot to open up a run at the 2007 highs. That seems unlikely here though, and I'd really need to see that conviction break over the pivot to take that possibility seriously.