I was leaning bearish for the last three days last week, and while SPX didn't go up, it didn't go down either. On Friday morning there was a very promising break down through a decent short term trendline that had developed. That was quickly reversed, and overnight that recovered trendline has held as support. A rough triangle has formed over the last few days and we may well now see a break up through triangle resistance. If that holds then trendline resistance is in the 1413-5 area and we may well see that tested. Triangle support is in the 1397 area:

On the SPX daily chart the upper bollinger band is at 1416 which fits with ES trendline resistance. If we do see a move up I would be surprised to see a move much beyond that. The retest of the 2012 high is at 1422.38 of course. Worth noting on this chart is where we are in terms of the current rising channel on SPX. Channel support is now in the 1355 SPX area, and if the bears are to produce anything worth seeing over the remainder of 2012, and I think they might well, the break down from this channel should be the signal. Until that happens the current uptrend will remain intact: 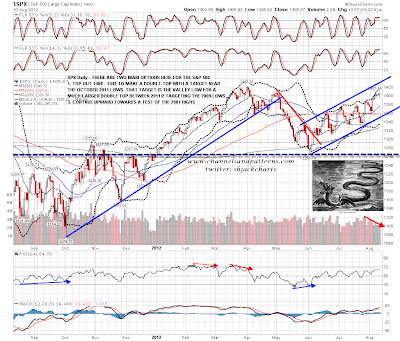 Why am I leaning short term bullish today? Mainly it's the Euro. I was talking on Friday morning about the possible bottoming action on the Euro then, and that has firmed up since then, with a break over the pattern neckline and declining resistance. A move down on EURUSD gives the bears a following wind, and a move up helps the bulls. EURUSD has reversed back up and I have an upside pattern target at 1.2375 and trendline resistance in the 1.25 area:

EURUSD isn't the only thing that may be reversing back up however. TLT reached the target I gave on Friday morning and a very promising looking IHS is forming. If it breaks up then there is a good chance that the TLT uptrend will resume after last week's test of major support. The pattern target is in the 129 area on a break over 126.5. That's probably less important today than the reversal on EURUSD, but probably much more important for the remainder of 2012: 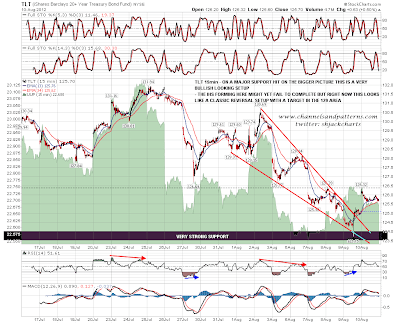 Longer term I'm still leaning bearish on balance, though the key is whether the 1440 SPX area pivot holds as resistance and we may well see that tested before a big reversal. I posted a chart in my weekend post showing the big Dow Theory divergence currently between the Dow and the Transports indices. You can see that here. The chart below is a longer term view showing these divergences over the last 15 years, and the scale of the current divergence is very much comparable to that seen at the 2000 and 2007 bull market tops. A strong run on TRAN to beat first the 2012 top and then the 2011 top would end this divergence, but  that would require a run of almost 10% up from here. This doesn't help pinpoint an exact top, but it is an indicator of market health, and as with copper, it doesn't look encouraging for a break above the 1440 pivot. 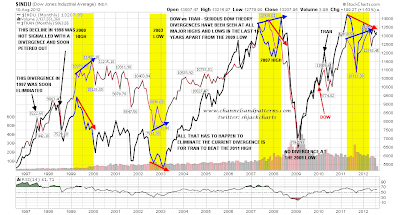 Short term support on ES today is in the 1397 area, and a break below would open up a move to the 1380 area, which I would see as a buy the dip opportunity. Short term resistance on ES today is at 1403 and a break above would open up a move to the 1415 area. If ES reaches the 1415 area I would be leaning strongly bearish and looking for a short entry for a decent retracement. Until we see a break I'm leaning somewhat to the bull side today.