Some of you might be wondering why I'm still looking for a higher high on SPX here. The answer is simple. Without at least a hit of 1430, and ideally 1435-45, we don't yet have a decent test of the 1440 area SPX pivot, and that makes any high here look like a short term swing high before continuation upwards. I'm looking for something more definite. We also don't yet have a decent short term topping pattern, generally an H&S, or a double or M top, to signal the high and deliver downside targets. That higher high might deliver both.

However we are where we are, and ES / SPX could go either way short term. On ES I have declining resistance in the 1412 area, and a break below would open up a test of the highs. A break below last week's low in the 1395 area would suggest a run at rising channel support in the 1368 area:

Rising channel support on SPX and the lower daily bollinger band are a bit higher in the 1377 area. A break below last week's low would look all the more bearish short term because the middle bollinger band is now at 1403. If we move up the upper bollinger band is in the 1430 area which is at the low end of my ideal topping area: 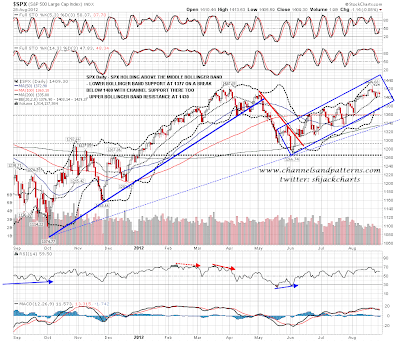 EURUSD, CL and TLT are all backing up the larger bear scenario at the moment. EURUSD and CL are both in very nice looking and large bear rising wedges, and TLT may well be forming an IHS targeting new highs. They're not quite cooked yet though. On TLT the left shoulder and head of a possible IHS have formed and there is clear negative divergence on the 60min RSI. A retracement to retest major support in the 123.5 to 124 area would be ideal to form a right shoulder, and if we see that, and the IHS then completes and breaks up, the target would be in the 132.9 area, not far below channel resistance on a broad rising channel I identified this morning. This is a nice looking setup and could well play out this way: 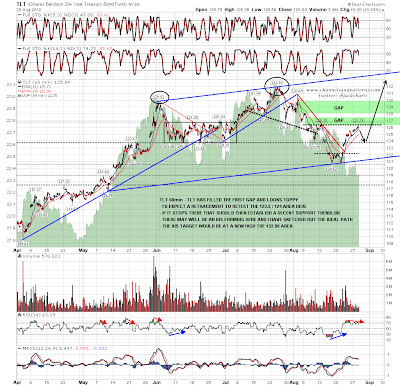 On CL I'm expecting a test of rising wedge support in the 94.3 area soon. We might well see a reversal back up there after that third touch of wedge support:

On EURUSD the double-top I was talking about as a possibility yesterday is now a probability, though there might be a move to retest wedge resistance in the 1.263 area before it turns down. I'm watching short term rising support and I've put the downside targets on the chart:

I've been saying all year that the technical picture on USD looks bullish, and posted a big picture view on this in April that you can see here: The technical bull setup on the medium and long term USD timeframes is very compelling. It could fail of course, but it hangs together very well indeed. The main potential danger to that setup is of course the Fed and QE3, and we're all waiting to see what the dude with the beard and the abysmal forecasting record has to say about that on Friday. In trendline terms DX is very close to a test of rising support from the 2011 low, and even if it bounces there, there is a part formed H&S that I will be watching. This is potentially very significant as when an H&S pattern  fails, it often fails with a smaller H&S forming that points in the opposite direction.  I'm expecting a strong bounce from rising support, and will be watching that potential bear H&S right shoulder until USD can make a new high:

Short term the likely retracement coming on TLT looks short term bullish for equities, and I'm thinking that we may well see EURUSD push to test 1.263 to support that. If we see TLT and EURUSD make those moves, then  they would deliver very attractive medium term long and short entries for TLT and EURUSD respectively. If it goes the other way and we see SPX break below last week's lows, then I'd expect a test of the 1377 SPX area soon, but without a decent technical high on SPX I think there would be a very good chance that support there would hold.