I was saying yesterday morning that we would either see a reversal at the daily upper bollinger band, or a series of small incremental moves up as SPX pushed the upper bollinger band up, and what we're seeing so far is the second option. This can last a few days though the ES 60min chart is looking a bit weak here. Here's the SPX daily chart: 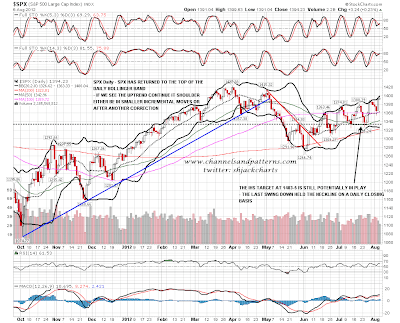 On the SPX 60min chart important resistance was broken yesterday at the declining resistance trendline from April. Some negative divergence on RSI but it's worth noting that rising channel resistance is at the 2012 high: 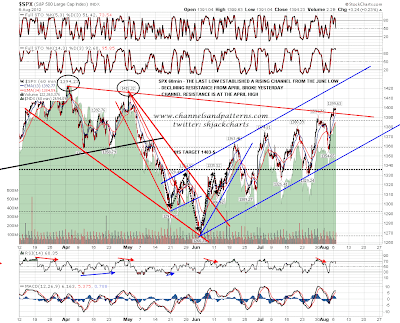 Negative RSI divergence also showing on the SPX 15min chart and what's also worth noting here is that there is a possible H&S forming. The neckline would be at 1389 and the target at 1380 support (July high). There's no trendline (yet) to signal a reversal by breaking but 1389 is important support and if we see an H&S form then that will be at least a short term shorting opportunity: 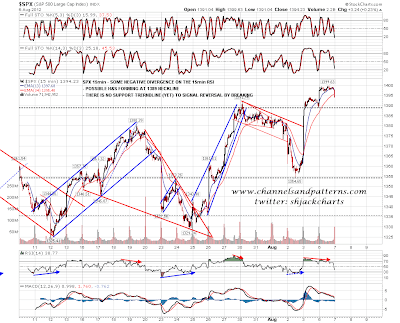 I've been looking at EURUSD again this morning and this might be a rising wedge forming rather than an IHS. If so then there is a possible double-top forming on negative RSI divergence that targets the 1.224 area, with wedge support in the 1.218-1.22 area. A break below the 1.234 pattern neckline would confirm that:

Overall I'm still leaning long on the SPX double-top forming scenario I was writing about at the weekend. A lot of resistance levels have broken on various indices over the last week and more upside seems likely. A decent gauge of how this might go can be seen on the EEM weekly chart, with the apocalyptic looking H&S that I've posted before. On EEM the obvious upside target is at declining resistance from the 2011 high in the 42 area, which would fit with an SPX retest of the highs or test of the 1440 SPX pivot. Both would leave the larger bear scenario intact unless they broke above their respective resistance levels: 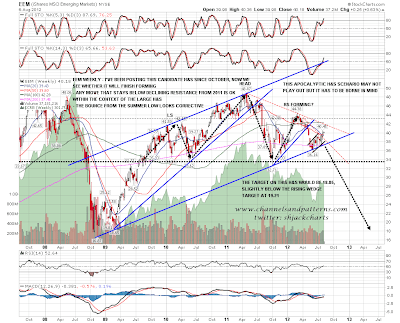 Short term we could see some weakness today. Support on SPX is at the 1389 and 1380 levels and on a break of 1380 the obvious target would be the daily middle bollinger band at 1363.