SPX and Dow both reached the ideal target area for a double-top yesterday, with both making marginal new highs for 2012 and reversing. I think there's a sound technical argument for seeing a test of the 1440 area pivot on SPX, but if this is a double-top forming then ideal targets were reached on both yesterday. Here's how that looks on the SPX daily chart: 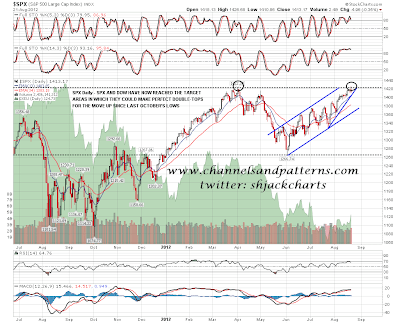 Here's my Dow vs TRAN chart showing the double-top on Dow with the still very large Dow Theory divergence between Dow and the Transports index that developed at the April highs and since the June lows: 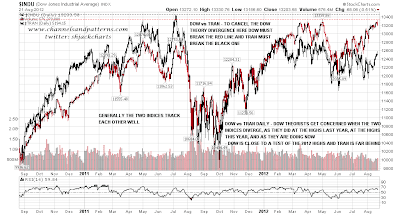 Is this a double-top? Only time will tell for sure, but the trendlines should light the path wherever the market is headed. On ES the high yesterday was at the touch of the lower resistance trendline I gave for the move since the late July low, and ES has fallen to find support at the support trendline from that low. That trendline is now established and any break below it should signal a larger retracement at the least. If we do see a break below the main target for the bears is the support trendline at 1359 and the cluster of SPX support MAs and trendlines in the same area. If those break then most likely we will see at least a full retracement of the move up from the June low and a test of that low:

On EURUSD a new rally high was made yesterday and what looks like a bull flag has been forming, with the overhead targets at 1.25 for the W bottom and 1.257 for rising wedge resistance. For the bull flag to play out I'd prefer to see EURUSD hold the 1.244 area:

On TLT the low was tested yesterday and that has delivered a very nice looking W bottom that broke up by the end of the day. The target would be a test of broken support in the 123.5 to 124 area. I have some trendline resistance at 122.7ish but I wouldn't expect that to hold against this strong bottoming setup: 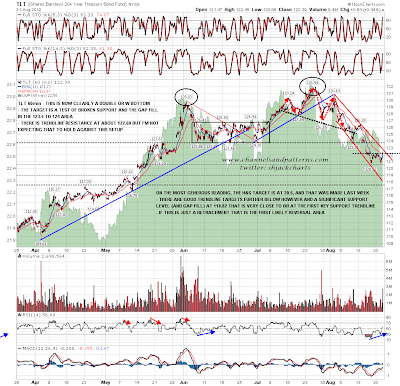 I think this is a very important support test today. If that support trendline on ES fails then the chances are that the swing high has been made, and we should then see a substantial further retracement, which might well develop into first a test of the June lows, and if that breaks, then a test of the October lows. Key support for the uptrend from the June low is in the 1360 area. As long as support holds this morning then there is definitely room for another push up. ES channel resistance is in the 1439 area today which would fit with a test of the 1440 area SPX pivot. TLT is suggesting that the swing high is already in, and EURUSD is supporting a bounce today so far.