I've been spending a lot of time looking at TLT over the last few days, and that's because while we have been seeing some interesting things on equities, the really important looking moves have been on bonds. If we see a really significant meltdown on bonds, and we're not there yet but we might be watching the start of that, then that has potentially big (upside) implications for equities. On the TLT 60min chart the H&S target was made yesterday, but there's nothing on the chart to suggest that a reversal is close as yet: 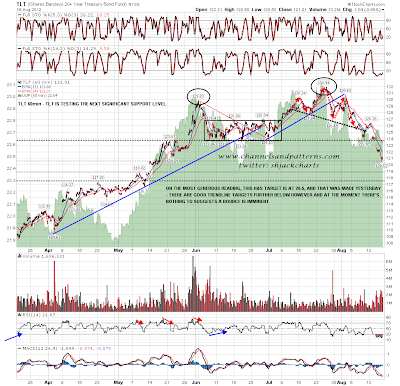 On the TLT daily chart we are close to a test of the first support trendline target. This isn't a really strong trendline as it doesn't yet have hits from three separate retracements, but it has had two hits from each of two separate retracements so it's well established. A break below would make it much more likely that TLT is now in a primary downtrend and open up the next target area in the 107 to 111 range: 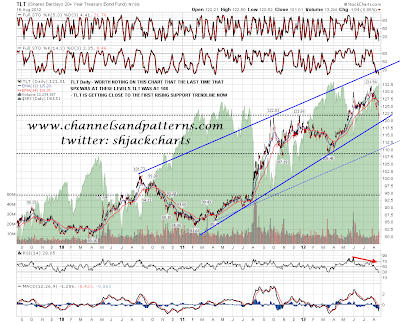 SPX came close to a test of the 2012 high yesterday and looks overbought in the very short term. First rising support on the 15min chart in the 1404 area and next rising support from the late July low in the 1394/5 area. I would very much like to see a hit and bounce on that lower trendline to deliver a strong support trendline to clearly identify when this current uptrend ends: 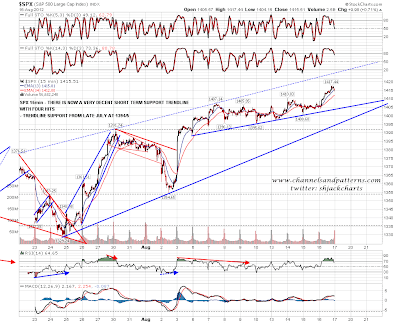 On the SPX daily chart we have overhead resistance at the 2012 high at 1422.38, the upper bollinger band at 1430, and rising channel resistance which is now in the 1440 area at the key 1440 area SPX pivot. On the downside the middle bollinger band is in the 1385 area and in the even we saw a break below that there is a cluster of support levels around 1360, at rising channel support and the 50 and 100 DMAs. That level is the key bigger picture bull/bear dividing line here: 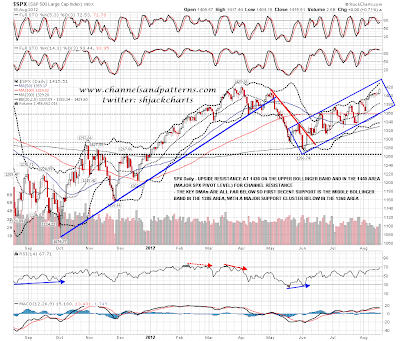 EURUSD has made the W bottom target I gave yesterday morning, but overnight has made a marginal higher high on sharply negative RSI divergence. You can see on the chart that similar setups have delivered every single short term reversal on EURUSD in the last month and we may well see another here. There is significant horizontal support at 1.2317, rising wedge support is in the 1.2275 area, and on an hourly close below that wedge support I'd be looking for a probable test of the 2012 lows in the 1.204 area:

The bull flag I mentioned on oil yesterday morning played out and the uptrend looks solid, though not particularly powerful. No current topping signals, rising channel resistance is in the 101 area, and the active rising support trendlines on CL are at 94 and 91.15 respectively:

It's opex Friday today and we may well therefore find that SPX pins at a level around lunchtime that holds into the close without moving much from there. There's a decent chance of a retracement in the morning looking at the very overbought 15min RSI on SPX and the likely reversal downwards coming on EURUSD. TLT is also very short term oversold though there are no current RSI divergences on TLT or SPX.