The first chartgrid shows a 1-Year
timeframe, with the SPX and RUT trading around their 50 sma, Gold is
above its 50 sma, and Oil is below its 50 sma. The second chartgrid shows a
2-Month close-up shot, with today's recovery into the close on
the SPX, RUT, and Oil. Gold closed near today's low. While the SPX and RUT have
made a new high during the past year (which is serving as near-term resistance,
thus far), Gold and Oil have not. The triple top on Gold at 1800 is serving as
major price resistance, while the 100.00 level is holding as major price
resistance on Oil (with the 50 sma holding as near-term resistance at
93.96).

The 1-Year
percentage lost/gained graph below shows that the SPX leads in
percentage gained, followed by the RUT, Oil, and Gold. 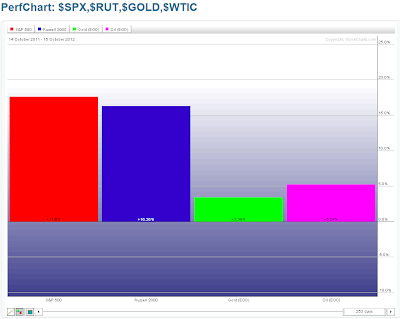 The 1-Year
comparison chart below shows that, on a relative-strength basis and in
price-action format, the SPX has gained the most over the past year, followed by
the RUT, Oil, and Gold. 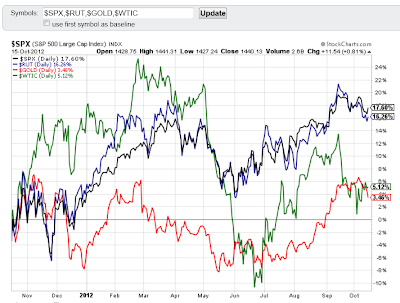 However, when we look
at a 3-Year comparison chart, we see that Gold is, by far, the
leader, followed by the RUT, SPX, and, finally, Oil. 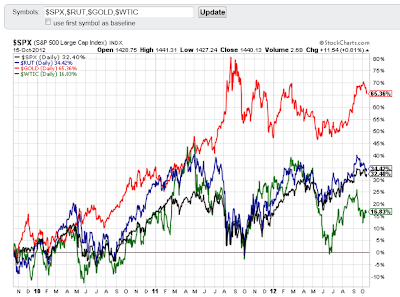 Finally, this last
comparison chart shows price action for the month of
October, thus far. Gold has seen the most profit-taking, while the SPX,
Oil, and RUT have seen the least and have turned up slightly the past two days.
Whether this is an indication that traders are taking profits in Gold to
fund further buying in equities and, possibly, Oil, remains to be seen.
This can be tracked over the next few days/weeks for confirmation of such a
scenario. 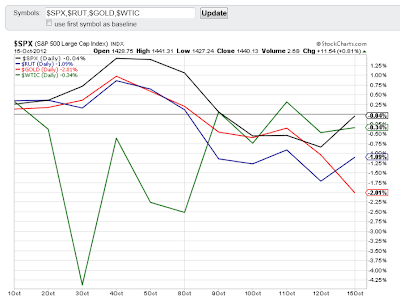 In any
event, the 50 sma is having an impact on price action on the SPX, RUT,
and Oil. Should all four instruments break and hold below this moving average,
we'll likely see a correction in equities and commodities, in
my opinion. I'll be looking for confirmation of this in short-term price action
on the OEX, DBC, the U.S. $, and 30-Year Bonds, as mentioned here
and here.