In the meantime,
the STOX50 remains range-bound within a zone of major
resistance below the 2011 highs, as shown on the Daily chart
below. Price is swirling around the 50 sma, but declining RSI, MACD, and
Stochastics Indicators are indicating weakness within this zone. In the absence
of encouraging and co-ordinated political, economic, fiscal, and financial
actions/reform by EU countries, I expect this Index to decline and, potentially,
test the uptrend line, which currently sits at 2350. 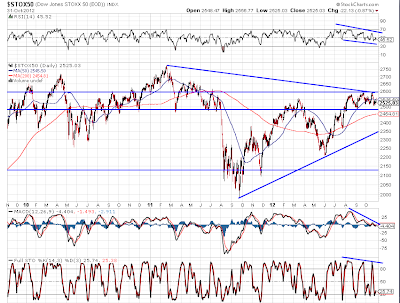