The New York based markets are reopening today though a lot of the workers there might be struggling to get to work. Nonetheless the view that they will reopen today seems to be firm so this should be the first full trading day this week.

While the main markets have been down the futures and equity markets have been getting out of sync, and in particular the declining channels on NDX and NQ are now very out of sync, which is going to make it harder to judge whether the current retracement has ended. I was saying last week that the channel resistance trendline on NDX would intersect the broken support trendline from the June low at the end of Wednesday this week at 2705-10, and that will no longer be the case I think. I'll review this chart after the open to see how that looks: 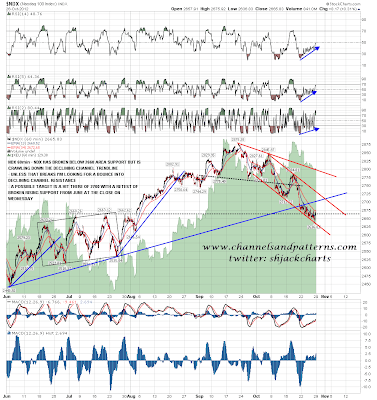 On NQ this declining channel has been disrupted less, and channel resistance is now in the 2706 area. The W bottom target (ignoring the AAPL spike down) is slightly higher in the 2715 area. Given the disruption to equity markets from Hurricane Sandy, this channel is now most likely the one to watch rather than the NDX equivalent. There is a distinct possibility that an IHS is forming on NQ and the target for the right shoulder low would be in the 2645-55 range: 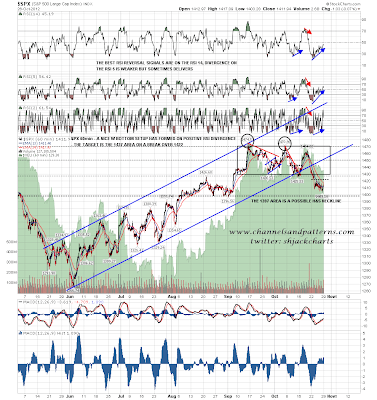 Given the disruption however I would again be more inclined to look at ES directly, and there a double-bottom target at 1432 has been triggered by the break over 1413. As with NQ there is a possible IHS forming, marked on the chart, and the ideal right shoulder low in this case would be in the 1402-5 area:

The action on CL increasingly looks like (short term) bottoming action and the first target is strong resistance in the 88 area. If that can be cleared then declining resistance is at 91:

One problem with lows that take several days to make is that very soon after a break upwards the 60min RSI is deep into overbought territory. One way to resolve this is to retrace to form a right shoulder on an IHS before resuming the uptrend and we might well see that on ES, NQ and EURUSD here. I have short term rising support on ES at 1412.25 and on a break below that I'll be looking for that right shoulder to form. If so this will most likely be a sideways to down day with more upside coming tomorrow or Thursday.

Have we made a significant swing low? That's harder to say. If IHSes do form and break up on ES and NQ here that will be more likely, as making the IHS targets should break the channel resistance trendlines on NQ and NDX. There is still a strong argument for seeing a test of the 200 DMA on SPX however, and we may well see that happen. The setup there is on my SPX chart from Monday which you can see here. For anyone who has taken the last two days off my posts from Monday and Tuesday are here and here, and my weekend post at MarketShadows is here.