Yesterday went pretty much as I'd hoped on ES. The low was a test of 1491 area support, and the high was at the ideal right shoulder high in the 1500 area, holding under the  50 HMA on an hourly close basis. The quality of the H&S forming on ES is still looking pretty good, albeit that ES is now trading back above the 50 HMA, and this bear setup has a decent shot as long as ES can stay under 1500. The H&S target in the 1476 area is also an excellent fit with a test of the SPX daily middle bollinger band in the 1480 area:

This H& is also clearly visible on the SPX chart and below is the 15min chart showing this that I posted on twitter last night: 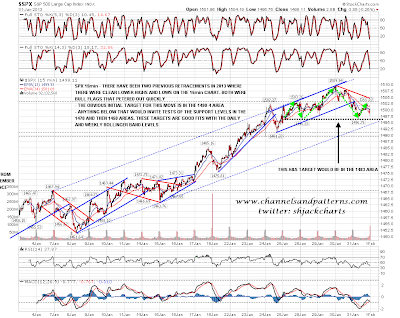 On the SPX 60min you can see that the H&S is forming at the higher possible neckline that I posted yesterday morning: 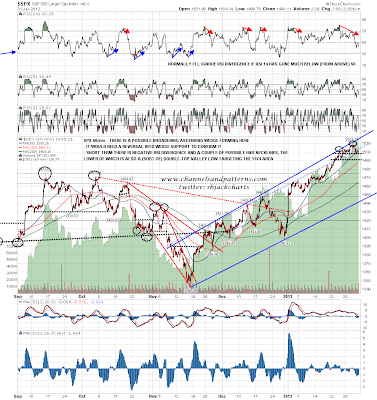 On the SPX daily chart you can see that the daily middle bollinger band is now in the 1480 area and that the current high is a good fit with rising wedge resistance. The historical odds strongly favor a test of this middle BB before another touch of the upper BB, now at 1513. Worth mentioning that Dow has slightly overshot this trendline on the wedge there, which definitely weakens it: 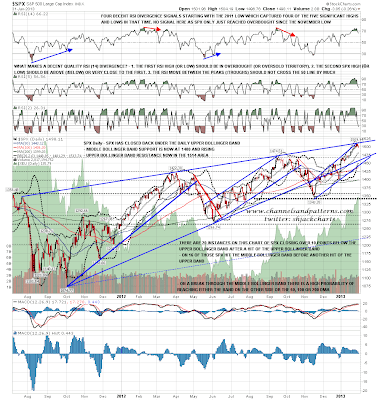 The setup looks very different on NDX, mainly due to AAPL I think. The possible rising wedge on there is still looking good, and wedge support could be hit near strong support in the 2700 area next week. There is obviously very strong resistance in the 2750 area: 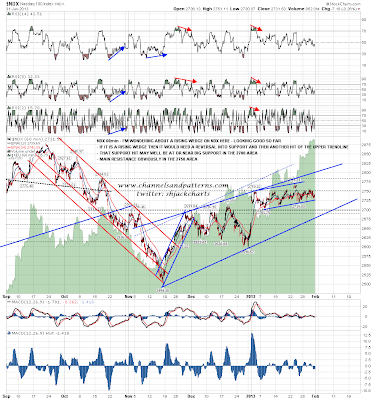 AAPL is at a short term point of decision having reached 50 on the 60min RSI 14, which is natural resistance, and and the bottom of the open gap above, also natural resistance. It's possible that we may see AAPL reverse to test the lows next: 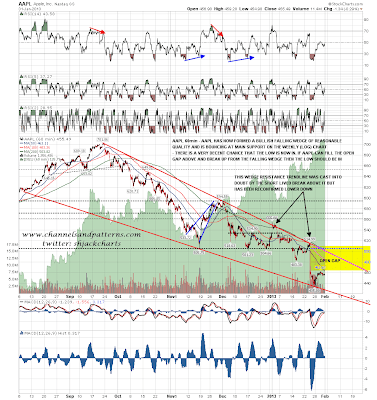 EURUSD has now broken over 1.36, and as I've mentioned I see the obvious next target in the 1.42 area. What I'll show today however is the DX chart, where after a very weak few days DX has now done two very bearish looking things. The first is that the possible rising channel from the 2011 has just broken. This was the bulls' last hope that USD is still in an uptrend from there in my view. The second thing is that DX has now completed the bearish H&S that I've been posting regularly for about six months targeting the 73.25 area and is testing the neckline. The neckline hasn't broken yet, but when it does I will be assuming that the 73.25 target will be made over the next year or so unless we see strong evidence to the contrary. One to watch:

I've said before that in a strong bull trend like this one nice looking bear setups regularly form and fail, and though the H&S setups on ES and SPX look good here there is still a high risk that these won't deliver. Any hourly close on ES over 1500 will make these look doubtful in my view so we'll see. I would be happier about these if ES returns below the 50 HMA and holds below there. At the moment ES has broken back above and it is holding as support which looks bullish.

Some stats for you today from the excellent and free Stock Trader's Almanac Blog. Today is the first day of February and the stats for today are very bullish, with Dow and SPX up 9 out of 10 of the last ten years, and Nasdaq up 8 straight years. This is another reason to feel doubtful about the bearish setup on ES and SPX here. January closed up, so the January Barometer says we should close the year up, and STA say that the January Barometer is right 88.9% of the time, which is a lot. I did mention in late December that the sharp fall then suggested that the January Barometer might well close bullishly and thus it has been. SPX closed up 5% in January, and since 1950 following a January with a 4% gain or more, February finished flat (less than 1% gain) or down 68.4% of the time.