I last wrote about what I call the Fed Monetary Stimulus Program "Canaries" in my post of January 11th. I have six of them…namely ETFs compared (by ratio) with their respective Stock Market Index. I chose these in order to determine relative strength/weakness, which may hold clues for further accumulation of riskier assets. At that time, five of the six were poised for a breakout above major resistance levels, and the sixth (European Financials ETF) was picking up steam and outperforming its Index.

Since then, my last post gave a very general/broad characterization of where I thought the Four E-mini Futures Indices (YM, ES, NQ & TF) were headed this year. However, I thought it would be prudent to review where my "Canaries" are trading at the moment, on a shorter time frame to either support or add caution to what I concluded in this last post.

So that we can compare current action with that of where they were in early January, I've, once again, provided Weekly ratio charts for each "Canary," as follows.

XLF:SPX ~ U.S. Financials ETF has continued to base at its resistance level…all indicators are in overbought territory. 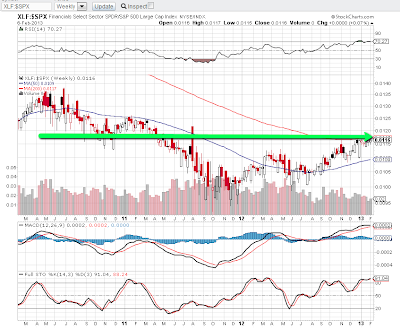 EUFN:STOX50 ~ European Financials ETF began to rally against its European Index, but has been basing at its resistance level…all indicators are in overbought territory. 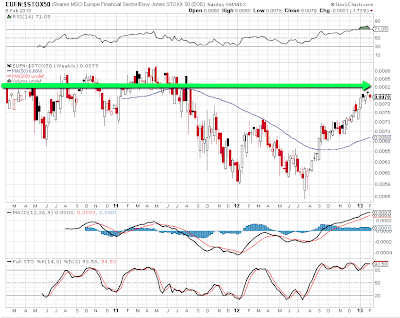 GXC:SSEC ~ Chinese Financials ETF has declined against the Shanghai Index and is sitting on a level of support…all indicators are still trending down, but are approaching oversold levels. 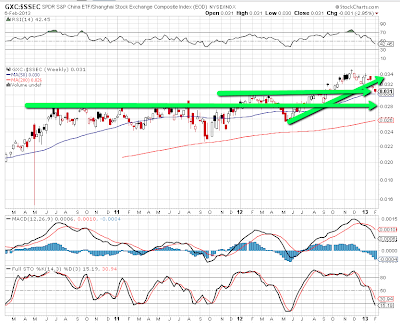 XHB:SPX ~ Homebuilders ETF has basically resumed its high-basing after attempting to break above resistance…all indicators have recently turned down at their overbought levels. 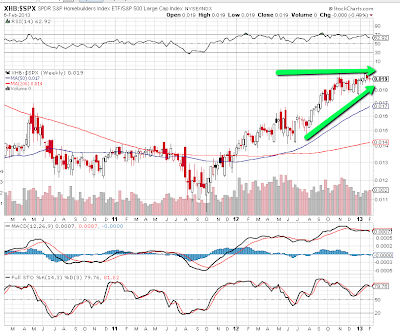 RTH:SPX ~ Retail ETF has been basing in a range from mid-2012…all indicators are trending down, but at a slower pace and are in the neutral zone. 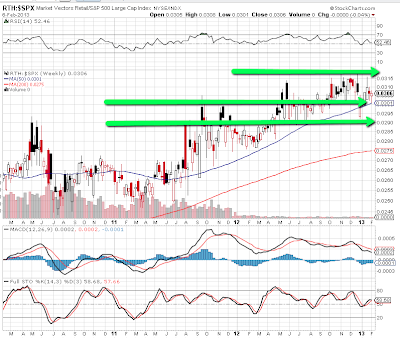 EEM:SPX ~ Emerging Markets ETF has declined against the SPX and sits just below near-term support…all indicators are still trending down and are not yet in oversold territory. 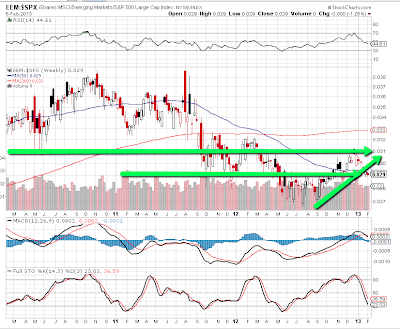 From this data, I would conclude that European Financials is the riskier bet (on a breakout and sustainable rally) at the moment, followed by U.S. Financials and Homebuilders. Retail could go either way, but a break and hold below its 50 sma (blue) would signal further weakness to come. Chinese Financials may be poised for a bounce, but would need confirmation of any reversal on its indicators (and I don't see any positive divergences yet). Emerging Markets is poised for further weakness.

It appears that riskier assets are overvalued at the moment. Market Makers may be "pushing on a string" at these levels…a pullback of some kind may be ahead in the near term to make entries into these sectors more attractive and sustainable in the long run.