The case for a retracement here hasn't been growing stronger as ES has continued to hold the 1491 to 1511 range over the last few days. The helpful double-tops on EURUSD and CL have both played out to target, and it may be that the downtrend on both has ended. Meantime ES has been holding above the 50 hour MA since yesterday morning, and that needs to break soon for the bears to be in with a chance today. The 50 HMA is now at 1506, trendline support from the 1490.25 test is at 1504.25, and if ES can get below those there is further support at the 200 HMA in the 1500.50 area, a level not generally broken in uptrends and it held at the low yesterday morning. Until we see ES back under 1500 the obvious next move is up:

There is still strong trendline resistance on SPX, and I'm expecting that to hold, but that is now in the 1520-5 area. A break over the declining resistance trendline on the 60min RSI 14 would look bullish short term: 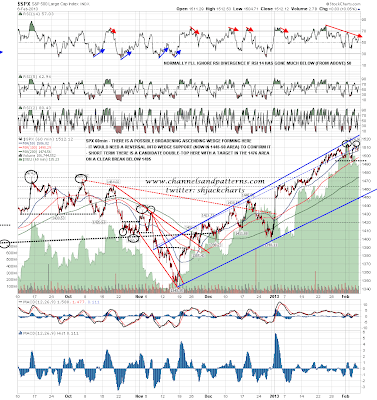 If we do see a break up, given that it is Thursday today, the obvious target would be the weekly upper bollinger band (again). That is now in the 1522 area and is a good fit with trendline resistance on SPX: 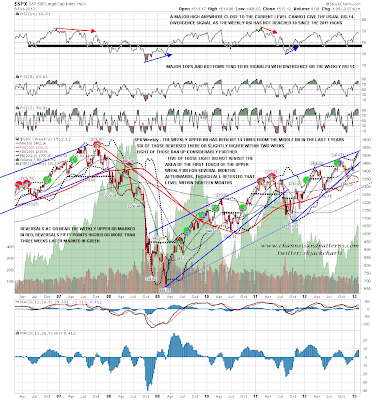 EURUSD is still in an unconfirmed downtrend, having failed to make a lower low yesterday. The double-top played out to target so there is no active downside target. I'm waiting to see whether EURUSD moves next to a higher high above 1.36 or a lower low below 1.345:

The setup on CL is interesting. I was talking early in the week about the double-top target in the 95 area and the possible H&S neckline that was also in that area. CL made the double-top target yesterday, bounced at the possible H&S neckline, and topped out at the ideal right shoulder high in the 97 area. As long as that holds this possible H&S is very much in play, though ideally the right shoulder would take another couple of days to form:

It is a measure of the strength of this trend that we have still not been retracing from these last highs. I think we are in an interim topping process, but SPX could run up another ten points or so as part of that process. The primary support and resistance range on ES is between 1491 and 1511, and a break in either direction should be respected short term. I'll be posting charts on NDX, AAPL, and gold on twitter after the open.