Shaking Out The Herd

In a Slope post on Tuesday ("30.2 Yield Curve And Gold"), Gary Tanashian noted that, "over the last 1.5+ years gold has shaken out the herd". Our host Tim, not one to follow herds, reminded us on Tuesday that he's currently long gold via GLD ("Target on GLD Long Approaching"); nevertheless, according to Reuters, more GLD herd members did get shaken out last month, with the gold ETF seeing a billion dollars in outflows in January. In this post, we'll look at a couple of updated hedges for GLD. First, though, a note about Bernanke's testimony yesterday, and an interesting gold chart Bespoke Investment Group posted in response to it.

Possibly the most widely-quoted part of Federal Reserve Chairman Ben Bernanke's Senate testimony on Tuesday was this exchange between the Fed Chair and Senator Bob Corker of
Tennessee, in which Sen. Corker called Bernanke an inflation dove, and
Bernanke retorted that inflation probably has been lower during his
chairmanship than any other time in the post-war period, averaging about
2% annually (I wrote "probably" there because Bernanke hedged his statement a little).

In response, Bespoke Investment Group posted the chart below, showing the performance of gold under the last four Fed Chairmen. 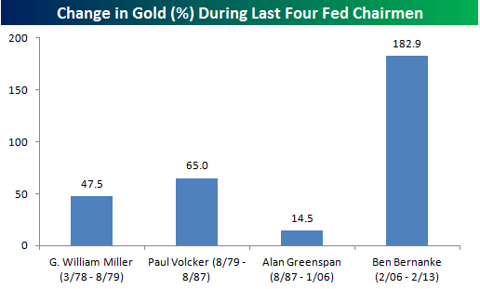 For those who use gold as a gauge of the dollar's true purchasing power, Bernanke's statement doesn't hold much weight.

Bespoke Investment Group's conclusion is true, as far as it goes, but
it elides the secular bull and bear market trends in gold over the time
frame of its chart. Of course, a secular bull market in gold peaked in
1980, and the next secular gold bull market didn't start until about 22 years later.
Volcker's chairmanship includes the final run-up to the 1980 peak, and Greenspan's
chairmanship includes most of the secular bear market in gold; someone
who looked at Bespoke Investment Group's chart without knowing any of
that might be misguided into thinking that Greenspan was an inflation hawk and Volcker a dove.

Gold and the GLD,
the most widely-traded gold ETF, both rose on Tuesday as Bernanke
testified, with GLD closing up 1.2% on the day. Nevertheless, GLD is
down about 10% from its 52-week high, and it's down nearly 15% from its all-time peak in September, 2011. Despite that, and despite GLD's recent outflows, the ETF is still quite cheap to hedge. 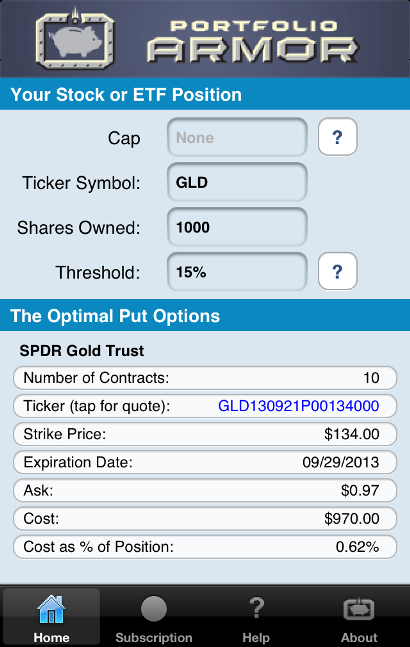 As
you can see in the screen capture above, the cost of those optimal
puts, as a percentage of position value, is 0.62%. Note that, to be
conservative, cost here was calculated using the ask price of the
optimal puts; in practice an investor can often buy puts for a lower
price (i.e., some price between the bid and the ask).

A GLD investor interested in hedging against the same, greater-than-15%
decline between now and September 29th, but also willing to cap his potential
upside at 15% over that time frame, could use the optimal collar**
below to hedge instead.

As
you can see at the bottom of the screen capture above, the net cost of
this optimal collar is negative — meaning the GLD investor would be
getting paid to hedge in this case.