SPX hasn't yet reached an important area for support or trendlines. While that doesn't necessarily mean that the low isn't in, I'll be assuming that it isn't unless we see a conviction break on SPX over the 1515/6 resistance area. I'm torn as to whether the current topping pattern on SPX is a very ugly H&S or a double-top, but either way the high yesterday was a retest of the broken pattern support level. This is important resistance today: 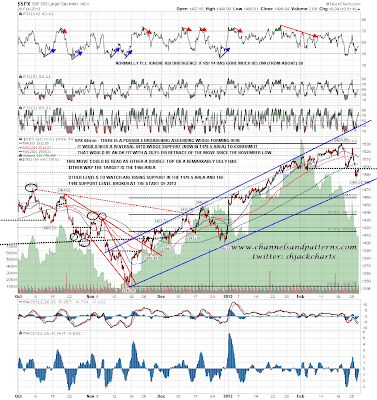 On ES we are still in bear flag territory, but after the retest of the lows yesterday a possible double-bottom has formed. I was looking for failure at the 50 hour moving average this morning and that was ambiguous. If we see a break over 1497.75 the DB target would be in the 1513 area. That would take ES into a dangerous area as there is strong resistance at 1510/1 and the 200 HMA is at 1510. I wouldn't like to see any sustained break over that level:

I'm expecting the downtrend on EURUSD to go further as well, after the break below rising support from the 2012 low, and in the context of the very bullish looking setup on DX. Short term though a double or W bottom may well be forming and the upside target would be 1.323 on a break over 1.3122:

CL is finding some support at the top of the important 91.3 to 92 support area. We could see a bounce here and I have important resistance, and a possible IHS neckline, in the 94.5 area. There is no RSI divergence here, but the marginal new low after a strong spike up is a classic bottoming sequence and I'm wondering about a strong bounce here:

TLT has made the double-bottom target at 119.65. There's no strong reason to reverse here but the pattern is no longer in play. As I mentioned yesterday, my ideal target would be in the 120.4 to 120.85 range: 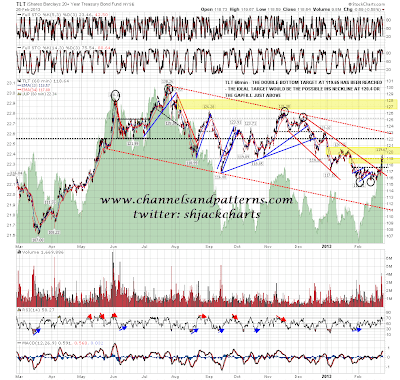 AAPL is forming a possible double-bottom targeting the 530 area. Falling wedge resistance is in the 465 area and that is major resistance. As I've mentioned often there is a decent chance that AAPL has made a major low at main support on the weekly (LOG) chart, so as long as the current lows hold I'm leaning bullish. If falling wedge resistance breaks that will change to very bullish: 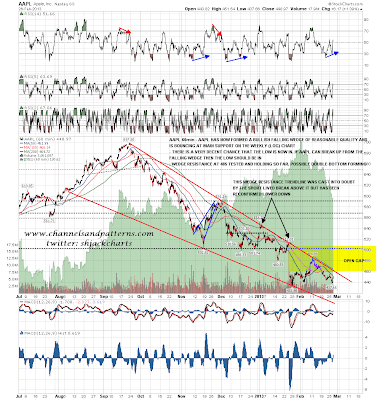 Gold hasn't yet hit the main support area 1523-35. As long as that holds this chart leans bullish, and on the basis of the broken descending triangle, potentially very bullish. Declining resistance from the 1798 high is primary resistance: 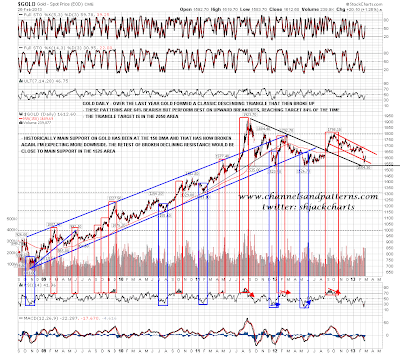 As long as yesterday's highs hold on ES the next obvious move is downwards toward the double-top target in the 1460 area. If we see a break above then there will most likely be a fight for control at the 1510/1 broken support level. If we see a clear and sustained break above that then the retracement low could be in. Until we see that though I'm leaning strongly towards more downside.