I last wrote about the EUR/USD Forex pair on February 7th. At that time, price was trading around 1.3400.

Price is trading in between the 50 sma (red) and 200 sma (pink). These moving averages are in a bearish "Death Cross" formation, and, as such, price is still under its bearish influence. A hold above 1.3045 could send it back up to retest its last swing high…a hold above that level could, finally, propel the EUR/USD higher to, eventually, reverse the moving averages to form a bullish "Golden Cross." This could take some time to play out, however, and we may see further range movement around both moving averages until then….otherwise, a drop and hold below the 50 sma could send price back down to retest the 50% Fibonacci retracement level at 1.2125, or lower. 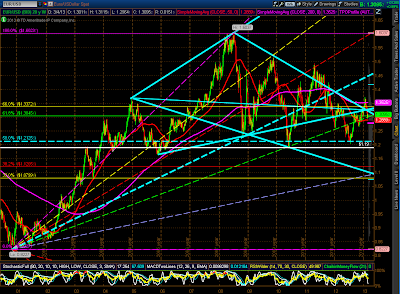 In addition, and as a confirmation to any move on the EUR/USD, I'll be watching the European Financials ETF (EUFN). At the moment, it's in overall uptrend from its July 2012 lows, but has experienced a pullback from its February highs of this year, as shown on the Daily chart below. The Stochastics and RSI indicators have turned up and the MACD looks ready to cross to the upside, as well. A price break and hold above its 61.8% Fibonacci retracement level and 50 sma at 20.69 should produce that MACD crossover to, potentially, propel price higher. Otherwise, a drop below Fibonacci confluence at 19.32 could send price down to its 200 sma at 17.60/50ish, or lower. 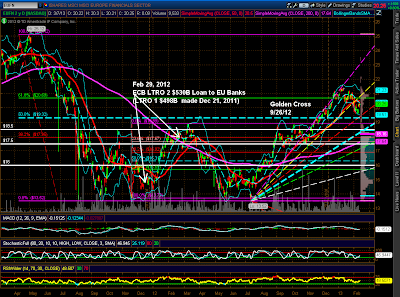