Early Wednesday morning, the so-called “Gang of Eight” — United States Senators Schumer, Flake, McCain, Menendez, Rubio, Graham, Bennett, and Durbin — released the text of their 844 page immigration bill. Among other provisions, the bill would give legal status and a pathway to citizenship to the estimated 11 million illegal aliens living in the United States. The Senate Judiciary Committee is scheduled to hold hearings on this bill Friday. If the bill passes the Senate and then the House of Representatives, and is signed into law by President Obama, it may have far-reaching consequences for the US economy. In this post, we’ll look at the potential political and economic impact if this bill becomes law, and then we’ll look at how it could affect a few specific companies.

Opinions differ on the economic impact of adding millions of legalized immigrants to the country’s population. Proponents of the immigration bill, such as Marshal Fitz of the think tank Center For American Progress, argue that it would expand American gross domestic product. Others, such as Harvard economist George Borjas contend that the bulk of the economic gains would go to the immigrants themselves, in the form of wages, and that the expanded labor pool would lower the wages of current American workers, as the chart below indicates. 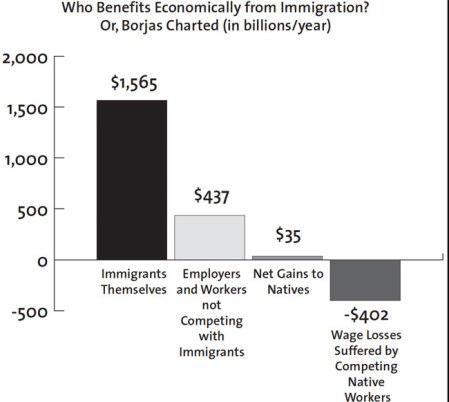 Note that employers are expected to gain in this scenario. We will look at a couple of specific examples below.

The political impact if the immigration bill eventually becomes law seems clear: the Democratic Party will be the winner, as will companies in the party’s favored industries, such as green technology. Granted, that statement raises an obvious question: if the immigration bill will benefit Democrats, why did four Republican Senators join the Gang of Eight to help draft the bill? The non-cynical answer would be that the Republicans believe this bill will help them win more Hispanic votes.

That answer strains credulity though, when one considers current poll data and historical electoral results. As Josh Marshall of Talking Points Memo wrote recently, Hispanics tend to vote Democratic because they tend to agree more with the Democratic party on a broad range of issues, not just on immigration. And it’s worth remembering that Republicans supported a similar immigration bill which was signed into law by President Reagan in 1986; in the following election, in 1988, Reagan’s successor George H.W. Bush won only 30% of the Hispanic vote.

Some Potential Winners And Losers

Before discussing how a few companies may be affected if the current immigration bill becomes law, two notes of caution:

Facebook, Inc. (FB). In a Washington Post op/ed last week, Facebook CEO Mark Zuckerberg offered inspiring reasons why he had joined with other tech executives to lobby for immigration legislation: to help immigrant entrepreneurs achieve the American dream, etc. But the Washington Post later reported that Facebook’s lobbyists had managed to insert a provision into the current immigration bill that would lower the company’s labor costs:

The payoff on the immigration provision could be substantial, allowing Facebook and other technology companies to avoid a requirement that they make a “good-faith” effort to recruit Americans for jobs before hiring from overseas. Facebook could also sidestep proposed rules that would force it to pay much higher wages to many foreign workers.

Tesla Motors (TSLA). Tesla has benefited from significant federal assistance so far: a $465 million loan arrangement from the Department of Energy, and a $7500 tax credit for buyers of electric vehicles. If the immigration bill passes, and Democrats further solidify their political supremacy, Tesla and other green tech companies could be the beneficiaries of expanded government assistance. Incidentally, if you missed it, see Tim’s review of his new Tesla Model S sedan.

Tyson Foods, Inc. (TSN). Tyson Foods operates in four segments: Beef, Chicken, Pork, and Prepared Foods. The first three segments of its operation would benefit from an influx of millions of newly legalized manual laborers, many of whom might be willing to work in slaughterhouses for lower wages than current workers.

Denbury Resources, Inc. (DNR). As Joel Kotkin noted in The Daily Beast last year, Democrats have increasingly turned against the fossil fuel industry. With Democrats winning greater political control, this trend could continue. This could be a headwind particularly for oil and gas companies that such as Denbury Resources that have most or all of their operations in the US.

Bank of America (BAC). Although Bank of America’s Consumer Real Estate Services segment might benefit initially from increased demand for mortgages by millions of newly legalized immigrants, to the extent that it keeps those mortgages on its books or is otherwise liable if the borrowers default, BAC may have to deal with a higher rate of foreclosures in the years ahead, if recent trends continue. According to research conducted by UC Berkeley professor Carolina Reid when she worked as a research manager for the Federal Reserve Bank of San Francisco (highlighted by blogger Steve Sailer), Hispanics have been disproportionately represented among foreclosures, as indicated by the chart below from Dr. Reid’s paper, “Addressing The Disparate Impact of Foreclosures on Communities of Color”. 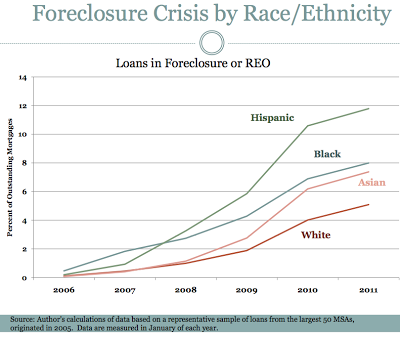 Ameliorating The Risk Of Owning These Stocks

At this point, the immigration bill represents increased uncertainty for all of the companies mentioned above — the ones likely to benefit if it becomes law, and be adversely affected if it doesn’t, and those in the reverse situation. For investors in these companies who are wary of the risks, but would rather not sell their shares at this point, we’ll look at a couple of different ways they can hedge against significant declines over the next several months. To illustrate, we’ll use one of these companies, Facebook, as an example. Then we’ll show the costs of hedging the other stocks we’ve discussed here in the same manner.

Below are two ways for a Facebook shareholder to hedge 1000 shares against a greater-than-20% drop between now and late September.

1) The first way uses optimal puts*; this way allows uncapped upside, but is more expensive. These were the optimal puts, as of Wednesday’s close, for an investor looking to hedge 1000 shares of FB against a greater-than-20% drop between now and September 20th: 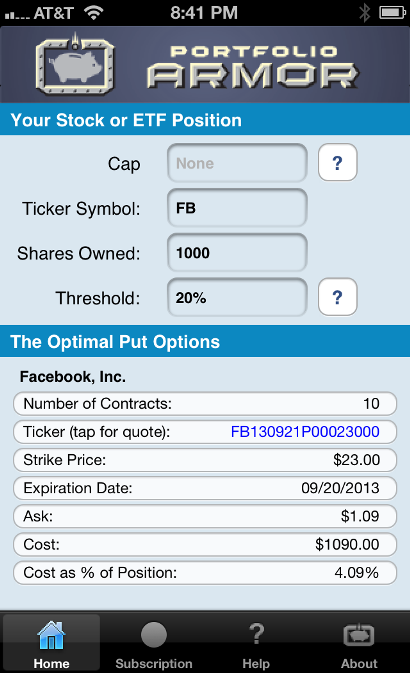 As you can see at the bottom of the screen capture above, the cost of this protection, as a percentage of position value, was 4.09%.

2) An FB investor interested in hedging against the same, greater-than-20% decline between now and late September, but also willing to cap his potential upside at 20% over that time frame, could have used the optimal collar** below to hedge instead.

As you can see at the bottom of the screen capture above, the net cost of this collar, as a percentage of position value, was 0.04%.

Hedging Costs For All Of The Names Mentioned Above

The table below shows the costs, as of Wednesday’s close, of hedging all of the stocks mentioned above in a similar manner as FB above: first, with optimal puts against a >20% drop over the next several months; then, with optimal collars against the same percentage drop over the same time frame, while capping the potential upside at 20%. The SPDR S&P 500 ETF (SPY) was added to the table for comparison purposes. There was no optimal collar available for Tyson Foods given these parameters as of Wednesday’s close.

https://slopeofhope.com/2013/04/some-potential-winners-and-losers-if-the-senate-immigration-bill-becomes-law.html
Some Potential Winners And Losers If The Senate Immigration Bill Becomes Law