Down Elevator For Bonds?

In a post on Tuesday (“Bonds are Prone to Much Lower Prices”), Tim predicted that the iShares Barclays 20+ Year Treasury Bond ETF (TLT) could fall to around $100 per share by the end of June. On Twitter on Friday, investor and newsletter publisher Bob Brinker offered a similar warning regarding the junk bond ETFs SPDR Barclays High Yield Bond Fund (JNK) and iShares iBoxx $ High Yield Corporate Bond Fund (HYG), both of which closed Friday near their lows for the day:

$HYG and $JNK are back to their late-January highs. Elevator down.

Downside Protection for TLT and JNK

With Tim’s and Bob’s warnings in mind, I looked at the cost of hedging TLT and JNK against greater-than-13% drops over the next several months (because that would limit TLT’s drop to just above Tim’s June target for it), and found something interesting: it was cheaper to hedge the junk bond ETF using those parameters than it was to hedge TLT in the same way. Below are a few optimal hedges on these ETFs against greater-than-13% drops, with a little speculation at the end about what this might mean. First though, a quick update on earlier post.

In a post on April 27th (“Hedging The Most Actively Traded ETFs”), I mentioned that a nano cap I had written about on Slope a couple of years ago, Wireless Xccessories Group (WIRX), had posted some positive results. The stock’s up another 19% over the last month; I fleshed out the bullish case for it in this post (“Another way to play the boom in mobile”), if you’re interested in more details.

These were the optimal puts*, as of Friday’s close, for an investor looking to hedge 1000 shares of TLT against a greater-than-13% drop between now and December 20th: 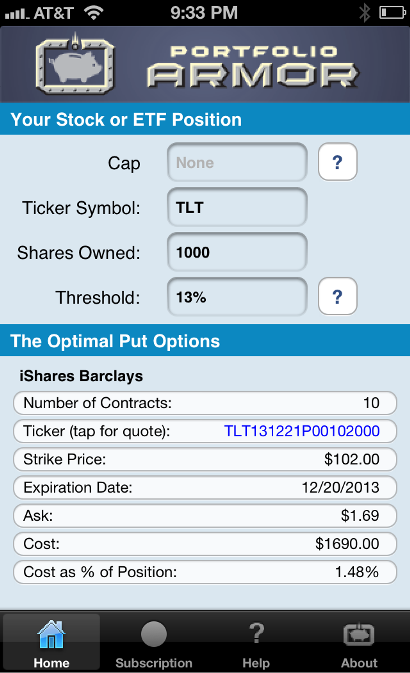 As you can see at the bottom of the screen capture above, the cost of this protection, as a percentage of position value, was 1.48%.

These were the optimal puts, as of Friday’s close, for an investor looking to hedge 1000 shares of JNK against a greater-than-13% drop between now and December 20th: 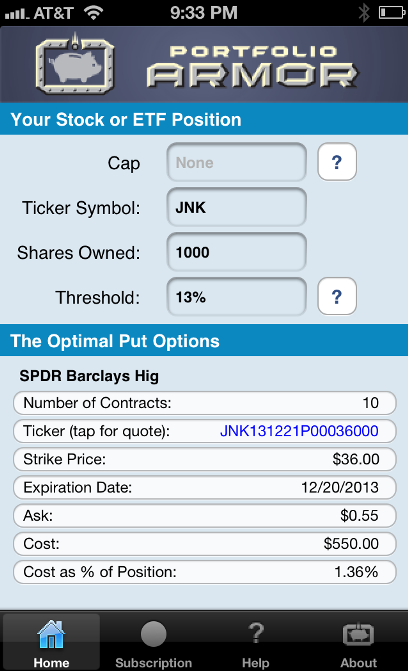 As you can see at the bottom of the screen capture above, the cost of this protection, as a percentage of position value, was 1.36% — lower than the cost of hedging TLT using the same decline threshold.

Hedging TLT With An Optimal Collar

Earlier we looked at a way to hedge TLT against a greater-than-13% drop using optimal puts. A TLT investor interested in hedging against the same, greater-than-13% decline between now and late December, but also willing to cap his potential upside at 13% over that time frame, could have used the optimal collar** below to hedge instead.

As you can see at the bottom of the screen capture above, the net cost of this collar, as a percentage of position value, was 0.72%.

No Optimal Collar For JNK

If you scanned for an optimal collar on JNK with the same parameters on Friday (13% upside cap and 13% decline threshold), you would have gotten this error message from Portfolio Armor: 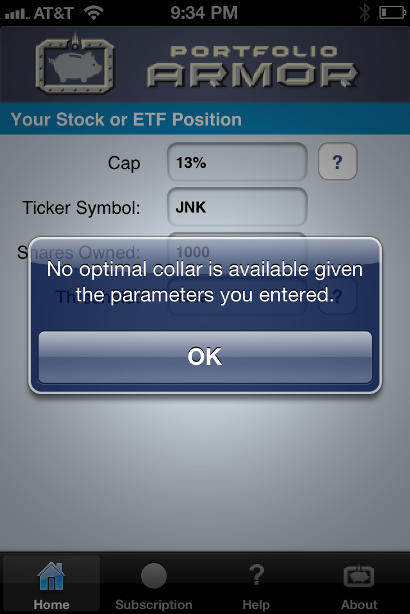 The reason no optimal collar was available given those parameters on Friday is that there were no bids on December JNK calls far enough out of the money. Option market participants seem to be slightly more bearish on TLT than JNK in the near term, but there is nevertheless more demand for out of the market calls on TLT — perhaps because some market participants believe that steep correction in stocks is possible before late December, and, if that occurs, money will flow into Treasuries as a safe haven.

**Optimal collars are the ones that will give you the level of protection you want at the lowest net cost, while not limiting your potential upside by more than you specify. The algorithm to scan for optimal collars was developed in conjunction with a post-doctoral fellow in the financial engineering department at Princeton University. The screen captures of optimal hedges above come from the Portfolio Armor iOS app.

https://slopeofhope.com/2013/06/when-its-cheaper-to-hedge-junk-bonds-than-treasuries.html
When It’s Cheaper To Hedge Junk Bonds Than Treasuries