As Tim reminded us on Tuesday (“Tesla’s Fire Sale“), he called the top for Tesla (TSLA) a few weeks ago (“The Tesla Top“). Today, that post looks prescient.

Last month, after a video surfaced of a Tesla Model S sedan that had burst into flames, I posted a hedge for Tesla longs concerned about adding downside protection (“Five-Star Safety For Tesla Longs“). In this post, I’ll recap that hedge and show how it reacted to Tesla’s post-earnings dive on Wednesday, November 6th.

This was the optimal collar*, as of October 2nd’s close, that was designed to limit an investor’s losses to 20% over the next several months, for an investor willing to cap his upside at 20% over the same time frame:

As you can see at the bottom of the screen capture above, the net cost of that optimal collar was negative, meaning the investor would have gotten paid $50 to hedge.

How That Hedge Has Reacted To TSLA’s Drop

Here is an updated quote on the put leg as of Wednesday’s close: 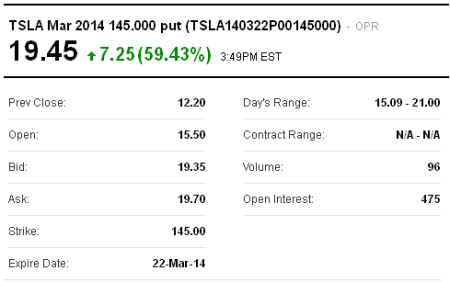 And here is an updated quote on the call leg: 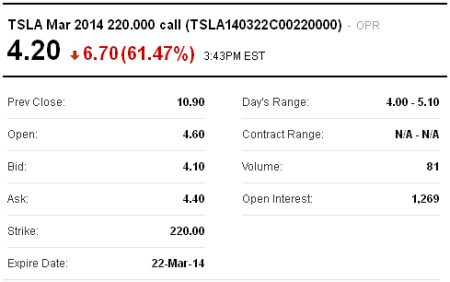 How That Hedge Protected Against Wednesday’s Drop

So, although TSLA had dropped by 16.5% at the time of the calculations above, and the investor’s hedge was designed to limit him to a loss of no more than 20%, he was actually down only 8% on his combined hedge + underlying position by this point.

Options Give You Options

Being hedged gives an investor breathing room to decide what his best course of action is. A TSLA long hedged with this collar could exit his position with an 8% loss now, he could wait to see what happens, or if he remains bullish on TSLA, he could buy-to-close the call leg of this collar, to eliminate his upside cap. If he’s even more bullish, he could sell his appreciated puts, and use those proceeds to buy more TSLA. He has those options because he’s hedged.

*Optimal collars are the ones that will give you the level of protection you want at the lowest net cost, while not limiting your potential upside by more than you specify. Portfolio Armor‘s algorithm to scan for optimal collars was developed in conjunction with a post-doctoral fellow in the financial engineering department at Princeton University. The screen captures above come from the Portfolio Armor iOS app.