Just a quick post this morning as I’m still adjusting back to UK time and my presence is required at a school Xmas concert where my sons will be performing starting at the same time as RTH today. I’m going to have a quick look today at the trendline and bollinger band backdrop to the retracement this week.

At the high last week a tentative rising channel has now been established from the October 2011 low. This is important because as long as this channel lasts the next obvious move will be to test rising channel support, currently in the 1575 area. It is also important because since the October 2011 low two large rising wedges have formed and broken up with targets in the 1930-65 area, but if this larger rising channel holds then both of those patterns and upside targets will be superseded. That’s not to say that SPX wouldn’t reach those levels later in any case, but those targets would no longer be active pattern targets.

There are two important trendline support levels on the way back to channel support, and the first is at the retest of broken resistance on the rising wedge from the June low at 1560. That is currently in the 1755-60 area and is a decent fit with the daily lower bollinger band, currently at 1754. If that level is taken out with confidence then that rising wedge target will be greatly weakened and a path would open up to the second trendline support level which is rising support from the 1560 low, currently in the 1690 area. SPX daily chart from October 2011: 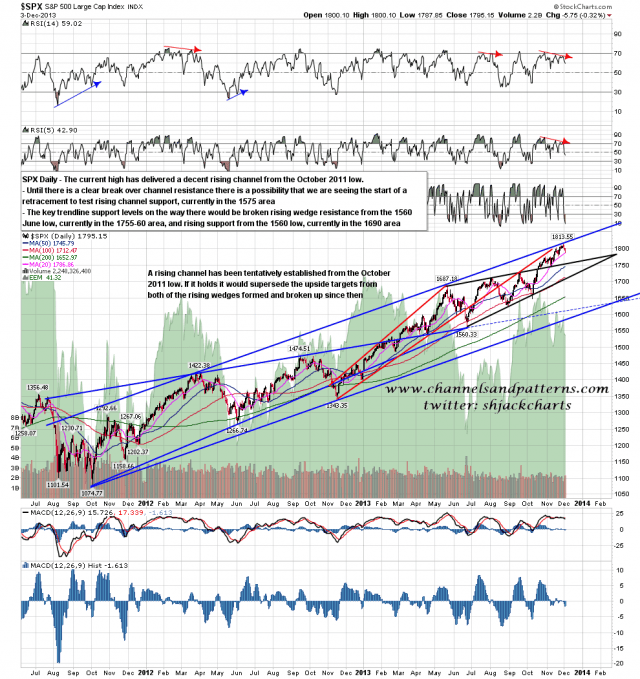 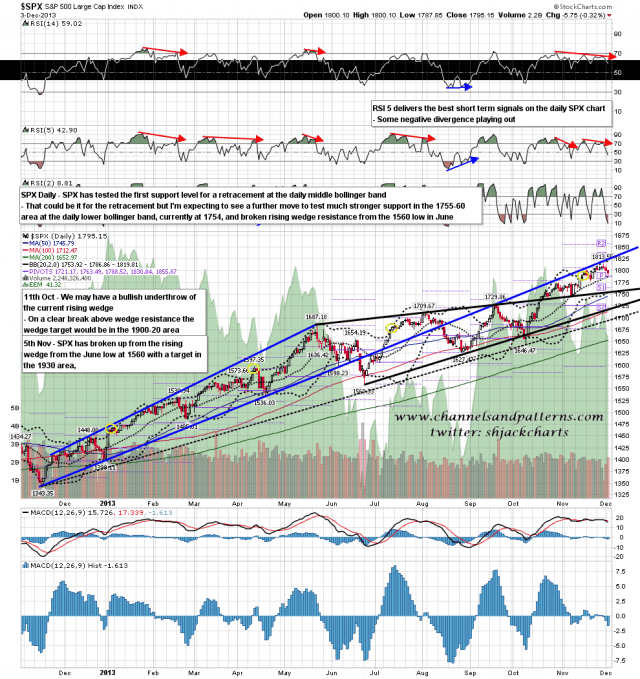 In mid-November there was a punch close over the weekly upper bollinger band. These are rare and I mentioned just afterwards that the three previous instances during Q4 in the last twenty years all delivered a retracement in the 4% to 5% range. A 4% retracement from the high would target the 1741 area which, if we should see that here, would open up lower targets in the 1720 area and below. SPX weekly chart: 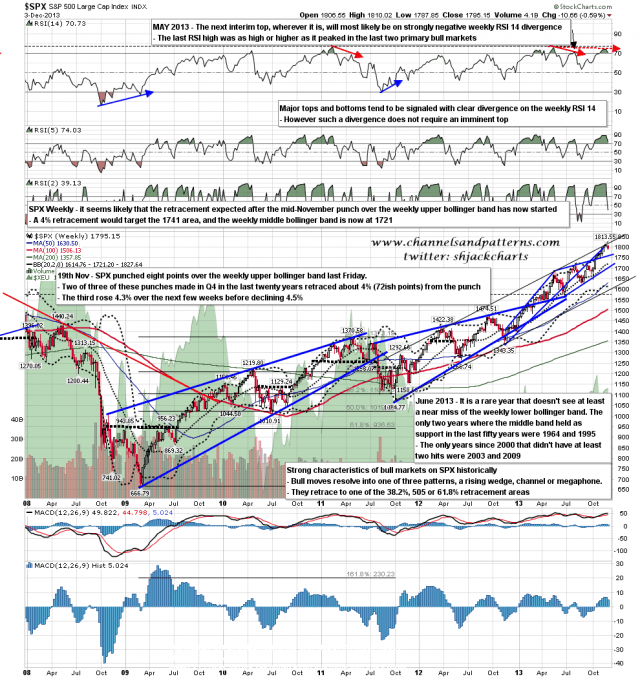 I’m doubtful about the prospects for a big retracement here over the next few months. QE is still running at full pelt and retracements during QE periods have been limited so far. Since 2009 large retracements have also mainly been confined to the seasonally weak period between May and October. Nonetheless there is plenty of negative divergence here and bullish sentiment has reached levels normally associated with sharp corrections so we’ll see. I’ll start to take this retracement seriously on a conviction break below the next big support level in the 1755-60 SPX area, and until we see strong evidence to the contrary I am also treating that support level as the obvious target for this retracement.

Normal morning posts will resume tomorrow morning and if I see anything interesting intraday suggesting that this retracement may be ending I’ll post it on twitter.