In a post on Monday (“VXX Sucks”), our host Tim noted the double digit move in the VIX (though not in VXX, which has made longs’ money evaporate since inception) on the day. With volatility getting a mild bump, I thought I’d take a look at the hedging costs of a few widely-traded stocks trading near their 52-week highs. Agricultural powerhouse Archer Daniels Midland (ADM) was one that was relatively inexpensive to hedge. Here are two ways of doing that over the next several months.

As of Monday’s close, these were the optimal puts* to hedge 1000 shares of ADM against a greater-than-20% drop over the next several months. 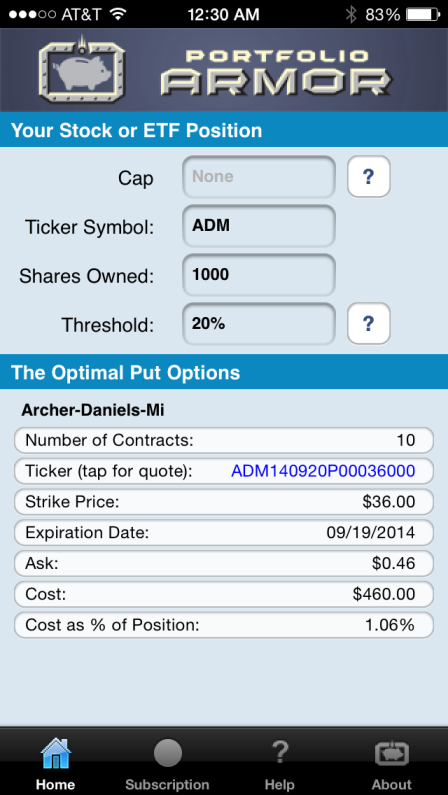 As you can see at the bottom of the screen capture above, the cost of this protection, as a percentage of position value, was 1.06%.

If you were willing to cap your potential upside at 14% between now and September 19th, this was the optimal collar** to hedge 1000 shares of ADM against a greater-than-20% drop over the same time frame. Incidentally, we first tried scanning for an optimal collar with a 20% cap, but on Monday there were no bids on collars far enough out of the money for that to work on ADM.

As you can see at the bottom of the screen capture above, the net cost of this collar was negative, meaning you would collect more in income from selling the call leg than you’d pay to buy the put leg of this collar.

Optimal puts and optimal collars on securities with high expected returns can be used to build a hedged portfolio around a position, in order to maximize potential return while limiting downside. For an example of a hedged portfolio constructed around another stock – Genworth Financial (GNW) – see this post.

**Optimal collars are the ones that will give you the level of protection you want at the lowest net cost, while not limiting your potential upside by more than you specify. The screen captures above come from the Portfolio Armor iOS app.