This is going to be one of those “personal” posts that has nothing to do with patterns, trendlines, volume, China, Yellen, Greece, the Troika, or any of the other dozens of topics which we beat to death on a regular basis each day here on Slope.

First order of business: I’m going to be taking one of my all-to-rare vacations over the coming eight days. Old timers here know that my “warnings” about me being away rarely mean much, since I tend to keep the posts flowing fairly actively, but if you notice I’m not as around quite as much as usual, well, that’s the reason.

Second, I wanted to write a little about the tone around here lately. Don’t worry, there’s no big problem: 98% of the conversations here are still the right combination of helpful, educational, respectful, humorous, and interesting. Indeed, I just went through the last thousand comments or so to dig up nasty examples, and I was really hard-pressed to do so. The community here is just terrific.

I think, however, one of the symptoms of the market slowly turning from bullish (March 2009-

December 2014) to bearish (January 2015-who knows) is that the bulls are getting really ticked-off. The stuff they have done mindlessly for the past six years (BTFD, BTFD, and then BTFD some more) simply isn’t working anymore.

Equity bulls, remember, are the welfare queens of capitalism. If the market goes up, they’re fine. They beat their chests, chortle about how smart they are, and want it to go on forever.

A descending market, however, sends them into spasms. They whine about wanting federal intervention. They want laws passed to ban short-selling. They grimace at reality emerging from behind the curtains. The Chinese – – the worst of them all – – actually start banning any writing that can be interpreted as bearish. 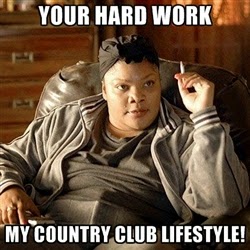 Ever notice there’s no such thing as an downtick rule? Oh, sure, there’s an uptick rule to muck things up for the bears, but no such thing for the bulls. How about the fact there are no circuit breakers for markets going up too much? And Lord knows the mainstream media (CNBC being the most awful) are firmly allied on the side of the bulls.

So the angst taking place among the BTFDers is starting to slither onto Slope. And when they get really worked up, they stamp their feet and say that I’ve been “jealous” of the bulls and am just lashing out.

Jealousy doesn’t enter into it. My disposition toward the 2009-2014 bull market is multi-faceted and cannot be boiled down to a simple childish emotion. The bull market did me a lot of good financially. And it did me some harm financially, particularly in terms of missed opportunities.

Did I, on the whole, miss out on it? Well, yes and no. Have I been generally bearish virtually the whole time? Yes, I have! Happy? It’s not like I’ve been the least bit coy about this point. It has been discussed, analyzed, and bandied about endlessly. So when a Troll Lite shows up and announces that I’ve been “wrong for six years”, it isn’t some scandalous revelation. It’s just annoying, and it’s only my devotion to an open, organic community that prevents me from banning those people instantly.

So now that I’ve been crystal clear (again) about this entire topic, it can be accepted as given knowledge. And, having said all that, I would state without reservation that during down markets, my charting skills are second-to-none. That’s just how my brain is wired (which probably explains why traffic has literally been double lately, now that we’ve got some market weakness, by and large).

Lastly, I had in this post a large picture of my wife and I cutting our wedding cake precisely twenty-five years ago today. The presence of a few not-so-friendly types here has caused me to remove it and stick to the policy I’ve had every since Slope was founded, which is to keep a lead wall circled around my family, their names, and their images. My desire to show off the gorgeous woman I was lucky enough to marry a quarter-century ago (who has, since then, physically aged by about a month or two) is trumped by my desire to recognize that Slope is a totally open forum, and not everyone is my friend. So – – no cute picture!

But I at least wanted to explain why I’ve re-entered travel mode and get off my chest some of the things I’ve been thinking about recently. Thanks for reading this, and if you’ll excuse me, I’ve got some packing to do!