Greetings from yet another happy hour – – this one in beautiful downtown Los Altos, California (which the Google boys pretty much own). I bid you greetings from behind a large glass of house red and a sampling of Greek appetizers. Opa!

Some of you wanted to get my “review” of Inside Out, which I saw with my beloved family this afternoon. In short, I thought it was terrific. This was no surprise, since I tend to like Pixar films anyway (Cars notwithstanding) and since I already had seen that, of all the Pixar films, this new one is pretty much the highest-rated.

But, since I’m Tim Knight, I just have to bitch about something, so here goes: although the theatre was nearly empty (this was an early afternoon on a weekday, remember) there were a pair of middle-aged women sitting on my aisle, about eight chairs down, that I had trouble tolerating. Besides the fact they were both quite portly (yes, yes, I’m a sensitive soul) they……….Would. Not. Shut. Up.

Perhaps you’ve encountered people like this before. The kinds of people that have no unexpressed thoughts. They have to utter every little thought that crosses their tiny little brain. Audibly. Quite audibly.

“Oh, that’s cute.” “That’s a bad pun.” “Oh, that’s just like a dream.” “Look at that.” And, when they didn’t actually have words to utter their banal emotions, they would make groan-ish type sounds to indicate that they were thinking of something, but they couldn’t quite state what it was.

I thus easily identified with one of the emotions in the movie, which is “Anger” 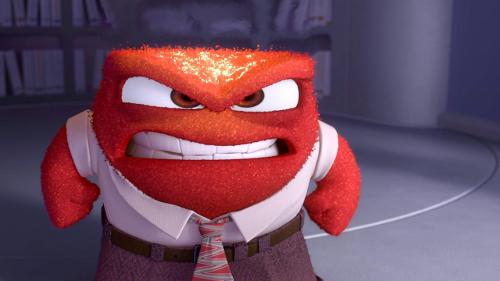 In spite of this nuisance, I really did enjoy the movie, and I highly recommend it to adult and child alike.

Now, as far as the markets go, I’ve got a couple of things to say. Thing One is that, as you know, I’m just loving this market. New Highs be damned, I’m ending every day with a profit, and I’m just thrilled to pieces with the quantity and quality of set-ups.

Thing Two I have to say is that, as usual, “fear” is exacting a serious tax on my profits. Today is a very typical example: I started off with 94 short positions, and I ended the day with 88. No big deal, right? The trouble is that if I had done nothing – nothing at all – my profit would have been about 80% better for the day (even though I obviously held on to the vast majority of my positions).

More often than not, I’m finding that complete passivity toward my portfolio would have served me better, which is kind of discouraging, because it means my hard work is actually subtracting value from my performance! I’d be better off sleeping through the trading day!

Apple’s own shellacking this evening reminds me of this as well, because I did, in fact, short a huge block of QQQ on Tuesday, but I made sure to cover it before the close, because – – as the pink skirt I’m wearing attests – – I got scared of a big GOOGL-style pop in AAPL and didn’t want to be exposed. But, instead, I am not “exposed” to the nice gains of being short QQQ. Genius!

Now, as far as Apple goes………I was expecting this “dud quarter” to appear at some point, and thank God, it’s finally here. This is an important marker for us, because, after all, AAPL is the largest company on the entire planet. I’m sure it has to do with the fact that I consider Steve Jobs to be one of the greatest people to have strolled the planet, but I’m no fan of Tim Cook, so I confess to smirking at this after-hours tumble. Let’s keep in mind that Steve Jobs:

Tim Cook’s achievements, on the other hand, consist pretty much of:

So there you have it. I’m sure Mr. Cook is quite smart, and quite clever, but he’s no Steve Jobs. No one is.