I last wrote about the World Market Index on August 30.

Since then, price did retest (and break above) the 1950 major resistance level to make a new three-year high, as shown on the Daily chart below. It closed just above that level on Friday.

Notwithstanding this year’s push higher (once it broke above above the prior year’s congestion zone), the RSI, MACD, and PMO technical indicators have failed to make a series of higher swing highs since mid-May…suggesting that market enthusiasm is waning in world markets, in general. 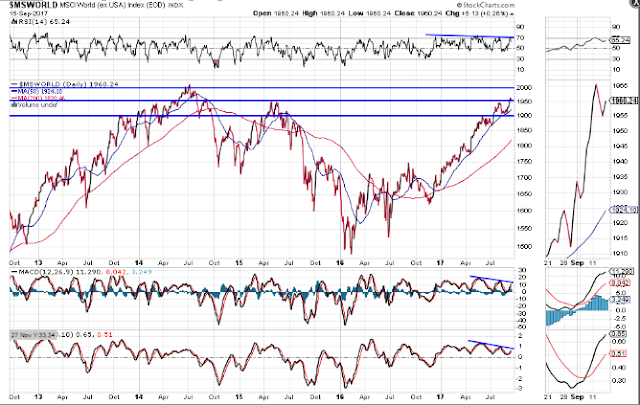 From the following Year-to-date percentages gained/lost graphs, you can see, at a glance, which major world markets are leading and which are lagging.

Of particular note, in terms of weakness, so far this year, Canada, London, Australia, Japan, Ireland, Russia, China, and the U.S. Russell 2000 Index lead the pack.

We’ll see if those laggards begin to gain support soon, and whether the leaders continue to make gains to, ultimately, cause higher swing highs on the above-referenced technical indicators, if we see a retest of the next resistance level of 2000 on the World Market Index. If so, we may see world markets gain strength to push even higher to new five-year highs.

No doubt, world traders will be interested in the Fed’s economic forecast and the Chair press conference following this Wednesday’s interest rate decision, along with the results of their subsequent meetings in November and December…so, we’ll see whether world markets react significantly, one way or other, this week, or not.