My fear for the future of the human race is grounded in two contrasting but related facts: (1) I am supposed to be extremely intelligent (2) I consider myself an idiot. In other words, if, based upon hard data from tests, the vast majority of people are less intelligent than me, yet if I consider myself just barely able to function and be a responsible member of society, where on earth are we all heading? I mean, come on – – I suck – – but most people suck even worse.

It wasn’t long ago that this wouldn’t have mattered at all. At any given point in human history, you could have created a bell curve of intelligence among all living humans. And yet how much has it truly mattered until recently?

In the year 1100, if you were far and away the most brilliant person in your entire village, would it have helped you at all? Would anyone have cared? Of course not! Because you just need to shovel the pig shit into a pile just like everyone else. Intellect was irrelevant.

Even just a generation ago, when my parents were growing up, it didn’t matter nearly as much as it does today. Take a couple of hypothetical people from 1950. Take some guy who was a “C” student, just barely graduated high school, and wound up screwing in bolts at the General Motors factory in Flint, Michigan. Now take another guy with an IQ of 140 who had a 4.0, got a bachelor’s degree in chemistry from Stanford, and went to work for Monsanto Corporation.

Perhaps the latter guy had a $30,000/year salary and a pretty nice house, whereas the first guy – – a complete dolt – – made $20,000/year and had a somewhat more modest, but still respectable, house. Their lives weren’t that much different, nor were their incomes. The super-smart guy got to enjoy a solid middle-class existence, whereas the prole beneath him was one rung lower, and not that much lower at that.

It’s utterly different today. And the scary thing is, the rate at which things get more different is increasing at alarming speed. 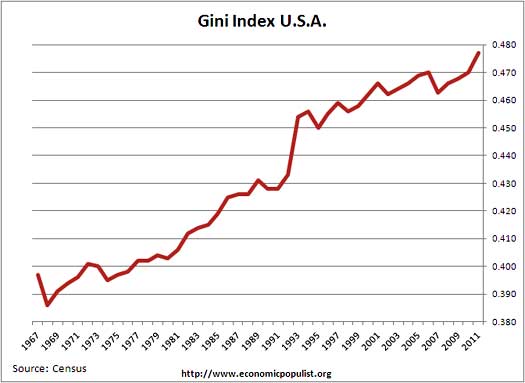 Take a new example based on the present day with a pair similar to the hypothetical fellows we just used above. If you are a C student with a high school education and really aren’t the sharpest knife in the drawer, well, God help you. I guess you could work at Walmart or go off to boot camp (after all, the bloated U.S. military is better-funded than ever, thanks to the recent budget). Overall, you’re going to have a fairly shitty hand-to-mouth existence, and you will be at the mercy of your so-called superiors until you die.

You will be Ralph Kramden, yet far less secure.

On the other hand, the sharp, smart, fellow has the world as his oyster. And the smarter and better-educated he is, the more bargaining power he has in the world marketplace for talent. If you are a whip-smart kid out of college, you are absolutely in a position to be making a salary deep into the six figures as a twenty-two year old. You will instantly be making a salary that people used to have to work decades to attain.

The gap is wide, and it’s going to get wider. And what’s going to blow this gap wide open is the forthcoming automation, which is going to lay waste to millions of jobs that used to be the bulwark of the middle class in the middle of the twentieth century. So what’s to be done about it?

As you probably know, the most common solution proposed these days is a Universal Basic Income (UBI). This means that everyone gets paid every month just for existing. Some proposals call for everyone, from the poorest of the poor to the richest of the rich, to get this payment. A figure I saw this morning was $1,000 per month for every person in the country, which would run about $2 trillion a year in the U.S.

Have you considered what a proposal really means? I’ve thought about it, and I find the entire notion depressing. For one thing, what it means is that there is a large portion of society which has NO WORTH to the rest of society. There is nothing they can do with their time that has value anymore. Indeed, THEY HAVE NO REASON BE ALIVE (from an economic standpoint, at least), but since we can’t run around killing them, we have to pay them so they can eat.

And do you know what that means to these poor souls? It means that their livelihood is to become food processors. So our statement to them is: (a) you exist (b) yet you have no economic value to society, so (c) here is some money (d) go buy food with it (e) sit on the toilet to shit and piss the processed nutrients out (f) go watch Keeping Up the with Kardashians and wait for your next payment.

Zero dignity. Zero self-respect. No reason to exist. The very concept of doling out checks to people simply because they happen to be alive is repugnant to me and everything I believe.

And it’s not like it’s their own fault. They didn’t ask to be born. And they didn’t ask to be mediocre. It is an accident of birth that I’m somewhat intelligent. And the fact that I married a woman way smarter than me has led, naturally, to us having children who are ungodly smart. The kind of kids that will grow up to be adults that run and own the world.

But what kind of world will it be?

The path I see us on will create a world with, on the one hand, an increasingly small elite of mega-rich, mega-powerful, ultra-intelligent leaders who are the only humans that have lives with true value and dignity and, on the other hand, a grotesque rabble of loutish poor who are robbed on any self-respect they might have by being force-fed unearned income to keep them right at the cusp of destitution, yet at least not starving.

Marc Andreessen, for instance, has voiced his strong support for UBI. I doubt it’s because of some innate love for the human race. I instead suspect, being a billionaire, he sees paying a tiny portion of his wealth to keep the poor from slicing his throat open, or beating his pointy head to a pulp, as a reasonable bargain.

And why do I feel so stupid? That’s easy. It’s the same reason I feel poor. Because if you’re in the top 2%, and you’re surrounded by people who are also in the top 2%, you’re going  to compare yourself to those who are at the 99th percentile, the 99.9th percentile, and the 99.99th percentile. And, compared to the people whom I see every day, I’m dull, I’m stupid, and I barely have two nickels to rub together. So I still have some perspective what it feels like to be at the bottom of the heap, because in a relative sense, I am.

So what would the real solution be? OK, fine, I’ll say it: a lot fewer people. And I’m not talking about mass extermination. I’m simply talking about a shrinking population. If I could wave any magic wand I’d love to see earth’s population start dropping precipitously. Our technology has us on a course such that we don’t NEED all these humans. How much better would the planet be with, say, only a billion people as opposed to eight times that many?

Sadly, no magic wand is at hand. And as happy as I am that my offspring have every advantage in this brave new world into which we’re plunging, it doesn’t make me any more satisfied about the general state of the planet or the human race upon it. We’re on a very, very bad course, and I don’t think these transitions are going to be devoid of worldwide war, riots, or mass mayhem.

We are going to be living through a new phase of history, and sometimes history is an ugly thing.